Spherical exosomes may deliver what an injured kidney needs 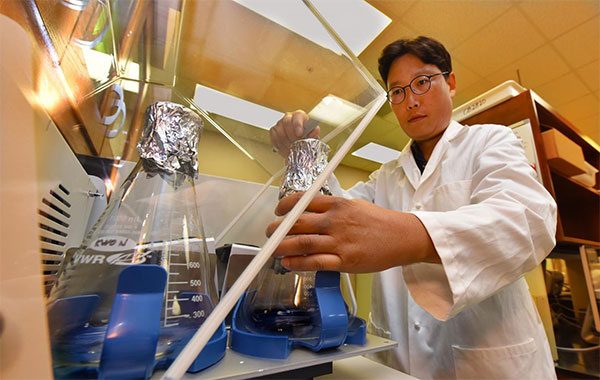 Like a swarm of construction workers in the aftermath of a destructive storm, cargo-filled, nanometer-sized spheres arrive on the scene following an acute kidney injury.

Like the construction workers, scientists suspect these spheres, called exosomes, are there to repair damage and restore function, and now want to learn more about what they are doing and the cargo they carry with the idea of one day equipping similar exosomes to better treat an acute injury and help people avoid permanent kidney damage.

“Once we better understand how they are produced and what they are doing, both good and bad, we will want to be able to control exosome secretion to help patients,” says Dr. Sang-Ho Kwon, cell biologist in the Department of Cellular Biology and Anatomy at the Medical College of Georgia at Augusta University.

A $1.7 million grant from the National Institute of Diabetes and Digestive and Kidney Diseases is helping Kwon explore the potential of this apparent endogenous recovery system for an injury with an increasing incidence and without good treatment.

Kidney function deteriorates in a few hours or days with an acute kidney injury, which can result from a literal blow to the kidney, like in a car accident, or from severe dehydration. Most previously healthy people fully recover, but common health problems like diabetes and high blood pressure, as well as just aging, are all risk factors. It’s also an in-hospital complication of sepsis, heart conditions and surgery, according the Centers for Disease Control and Prevention. The consequences can be lifelong, with a higher likelihood of the need for long-term care, increased chronic kidney disease, higher death rates in hospitalized patients and higher health care costs, the CDC says.

A key damage site is the tubules, which are connected to the some 1.5 million filtering units in our kidneys. Tubules pass liquid waste along to the bladder for elimination but they also have the important task of daily resorbing nearly 50 gallons of usable items, including water, salt and glucose, filtered from blood.

While doing his postdoctoral training, Kwon developed a model for growing a mammalian kidney tubule in a Petri dish. He would learn that during normal tubule formation, about 9% of the genes whose expression he saw changing were making cargo for the exosomes he saw coming from the epithelial cells that cover the network of capillaries comprising the filtering units, which feed the tubules. Like connecting the dots, he watched exosomes move from one epithelial cell to the next, which brought the cells closer together and extended tubule length. Later he found these newly packaged exosomes could activate cell proliferation, tubule growth and aid wound healing and wondered if the same thing might be happening in response to tubule injury.

This time he is looking again in the dish for any impact on healing, but he also is looking in a living model of an acute kidney injury to learn more about how, where and how many exosomes are produced, and the specific role they play in regrowth, with a particular focus on the protein cargo they carry. That includes looking in the urine of mice with an acute kidney injury for what exosomes are secreted, which proteins are present and which help or hinder repair.

Proteins are an essential building block throughout the body during development and in ongoing repair and recovery, and Kwon is looking at proteins like GPRC5B, whose specific function is essentially unknown, but which he has early evidence aids tubule recovery, both in his dish as well as the injury model. His collaborative studies with the University of California, San Francisco have also shown GPRC5B’s level elevated in the urine of patients one day after experiencing an acute kidney injury.

Now Kwon and his team are looking at what happens with GPRC5B and other proteins over the course of injury and recovery, including what prompts exosomes to release the proteins. His studies include knocking out the protein in the first part of the tubule called the proximal tubule, a major site of destruction with acute kidney injury, as one way to determine its function following injury. He’s making the protein fluorescent to better watch its actions inside exosomes and tubules.

“We want to look at whether these changes are happening in vivo (an animal model),” Kwon says. He also wants to know whether exosome secretion is good or bad for recovery, and suspects it could be either, depending on the cargo. “We don’t know yet, so we are going to test it.”

Additional questions include whether exosomes go back for more cargo or make a single delivery, and if exosomes are delivering signals in addition to cargo, and what their messages might be. Also, whether, like in the dish, epithelial cells, the major component of tubules, are the exosome source in a living model, and what regulates their production and the release of their cargo.

Preliminary work indicates for example, CD2AP, a protein already associated with kidney disease, decreases exosomes’ release of GPRC5B when it’s decreased, and LMAN2, a transport protein, increases the release of GPRC5B when it’s decreased. That may mean a change in the number of exosomes, what they are carrying or both and Kwon wants to know how both affect tubule healing in real time.

Our kidneys’ filtering units and tubules appear intended to last a lifetime, although Kwon suspects some minor repair work is done fairly routinely. For some patients, an acute kidney injury appears to overwhelm the body’s natural ability to do that.

“If patients can’t fully recover they likely will have chronic kidney disease or, in the worst case, end stage renal disease,” Kwon says of resulting loss of function that may require dialysis or an organ transplant.

Spherical exosomes are mostly made of lipids and have a sugar coating.

While exosomes are classified as “extracellular” there is increasing evidence from scientists like Kwon that they actually move in and out of cells, carrying cargo like proteins and other essentials like DNA and RNA, and carrying messages between cells normally and during disease or injury.

Their natural agility already has exosomes under investigation as a more natural way to directly deliver drugs for disease states from cancer to infections as well as promoting hair regeneration. As “fingerprints of the cellular states,” they also are under study as diagnostic biomarkers for disease.

Kwon ultimately would like to one day utilize both assets in acute kidney injury, a problem for which there is also no good clinical biomarker.

An injured tubule has similarities to an injured blood vessel: instead of providing smooth fluid passage and easy resorption, it has a scarred and bumpy interior and rigid walls that interfere. Tubules are of varying lengths, skinny, some are straight and others curved. Exosomes’ nanometer size is a billionth of a meter, which is about 40 inches.