A federally-funded study led by Johns Hopkins Medicine researchers discovered that communication among cells is altered in pregnant women who go on to develop postpartum depression (PPD) after giving birth.

Changes in extracellular RNA communication, a recently discovered cell signaling method, have already been linked to premature births, gestational diabetes, toxic maternal high blood pressure and other pregnancy-related events. Leaders of the new study examined maternal blood and sought to determine if there were distinct changes in this extracellular communications system during PPD. The extracellular RNA communication changes identified in the study suggest that women who develop PPD are unable to efficiently remove aging and defective cell components. This process, called autophagy, is also known to malfunction in the brain of patients with Alzheimer’s and Parkinson’s disease.

One in nine new mothers has postpartum depression, a condition marked by periods of sadness, loneliness and inability to care for their newborns that last longer than two weeks.

“With postpartum depression, there are many potential negative outcomes, such as a high rate of suicide among mothers or a disruption in the baby’s cognitive, emotional and social development,” says Sabunciyan. “If we could identify mothers who may be more at risk ahead of the birth, we might prevent these adverse events.”

Efforts have been underway for decades to identify genetic or other biological markers for PPD.

In the new study, the research team specifically investigated the messenger RNA (mRNA) content of extracellular vesicles (EVs) — fatty sacs of genetic material that is essential to communication among cells. During pregnancy, Sabunciyan says, this communication system ramps up to address needs for embryo implantation and growth. A mother’s placenta also releases RNA vital for immune system development that protects the growing fetus from viruses.

Sabunciyan, a neuroscientist at Johns Hopkins Children’s Center whose work focuses on the root causes of psychiatric disorders, says the research team collected blood samples from 42 women who were pregnant and were seen at The Johns Hopkins Hospital.

Newly developed sequencing and computational analysis methods were used to measure the level of thousands of different mRNAs that are packaged into EVs in the blood of 14 participants during the second and third trimester of pregnancy and up to six months after giving birth. Seven of the participants were diagnosed with postpartum depression after childbirth, receiving a score of 13 or above on the Edinburgh Postnatal Depression Scale (a standard tool to identify women with the condition). None of these women had signs of depression during pregnancy. The mRNA levels identified to change the most robustly in participants who had PPD using this analysis were then measured in the blood of an additional 28 women during pregnancy. Fourteen of these women were diagnosed with PPD and five of them exhibited signs of depression during pregnancy. The changes in mRNA levels identified in those who developed PPD in the first set of 14 participants, replicated in the second group of 28 women, confirming the validity of the sequencing findings.  Of the 42 women in the study, 34 were white, four were Asian or Pacific Islander, two were Black and two identified as another race. All were in their late 20s or early 30s, and had live births.

The research team says this analysis revealed that extracellular RNA communication levels during pregnancy and the postpartum period were “extensively altered” in women who developed postpartum depression. The researchers found that the level of 2,449 mRNAs changed (1,010 increased and 1,439 decreased) between those who went on to develop PPD compared with those who did not. On average, there was nearly a twofold difference in individual mRNA levels between the two groups. The vast majority of these changes occurred during the pregnancy instead of the postpartum period. 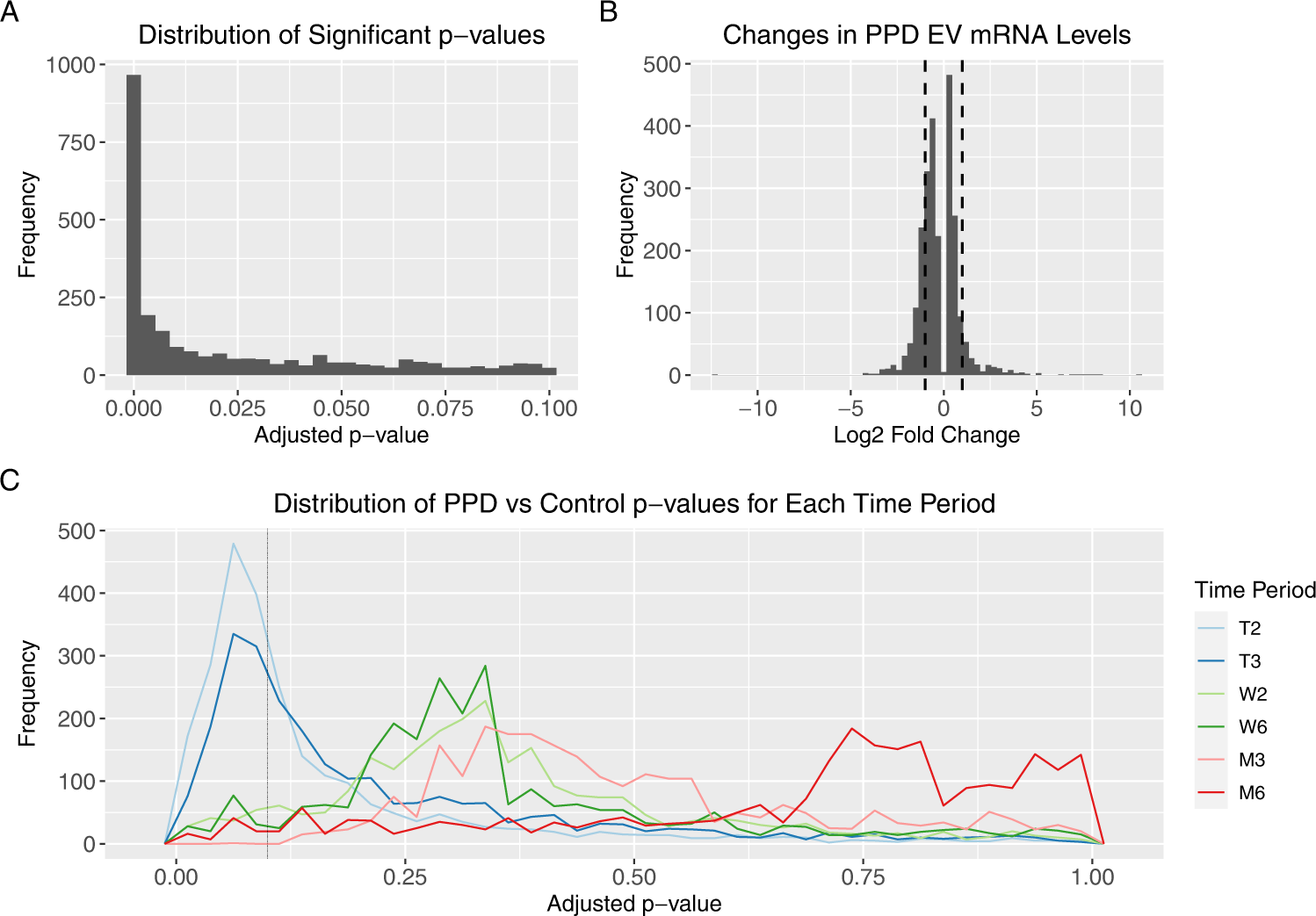 A Histogram of p-values that remain significant following adjustment for multiple testing. The low p-values demonstrate that the majority of the identified differences are highly significant B Histogram of the changes in PPD EV mRNA levels. The dashed lines are at −1 and 1 log2 fold change. C P-values for PPD vs control EV level comparison for each time period. The dashed line demarcates the threshold of p = 0.1 following multiple testing correction via the Benjamini–Hochberg method.

The researchers also discovered that EV mRNA levels associated with autophagy were decreased in women who later developed PPD — meaning the cells were not cleaning out excessive, damaged or defective parts. In addition, they found that EV mRNAs associated with PPD originated from white blood cells known as monocytes and macrophages.

The researchers caution that their study was limited by small numbers and a lack of racial diversity. But they say if further studies confirm the findings, they could potentially develop a blood test that can identify women who are pregnant who are at risk for developing PPD after delivery. The research may also advance development of therapies for PPD.

“If we can identify those at risk early, and get them into proper treatment, we’re likely to be able to prevent a lot of serious effects of postpartum depression,” Sabunciyan says.