An international team of scientists has found new biomarkers that can be used for diagnostic purposes and potentially as predictive tools of the risks associated with deep-space flight.

In their study, the team, including three researchers from Lawrence Livermore National Laboratory (LLNL), examined approximately two-decade-old blood samples from space shuttle astronauts before and after flight.

Their findings have been published online in the journal Frontiers in Genetics.

“We knew that nucleic acid within exosomes can be intact for 15-20 years, but we weren’t sure how space travel would affect them and whether we would find intact exosomes containing nucleic acids in the two-decade-old blood from space shuttle astronauts that was stored away,” said LLNL biomedical scientist Matt Coleman, of the Lab’s Biology and Biotechnology Division.

Exosomes are small extracellular lipid-protein spheres that carry other molecules inside, allowing cells and tissues to communicate with each other. Long non-coding RNA (lncRNA), which controls and turns on cell mechanisms, can be found in exosomes among other types of RNA.

“Space changed the RNA within the exosomes of the astronauts who went into space,” Coleman said. “They had signatures that they were astronauts; they had been in a reduced-gravity environment and exposed to doses of space radiation.”

In their study, the researchers found 27 different expressed lncRNAs, or biomarkers for spaceflight, that changed between pre-spaceflight and after flight.

“Something about spaceflight changed the amount of RNA in the astronauts’ blood,” Coleman said. “They were in key pathways that regulate transcription, cell-to-cell signaling and intercellular signaling.

“When we compare before and after space travel, we see a change in the amount of lncRNA — either more or less — and those changes directly affect the genes that are turned off or on in important cellular functions associated with neurodegeneration, general health and cardiovascular disease.” 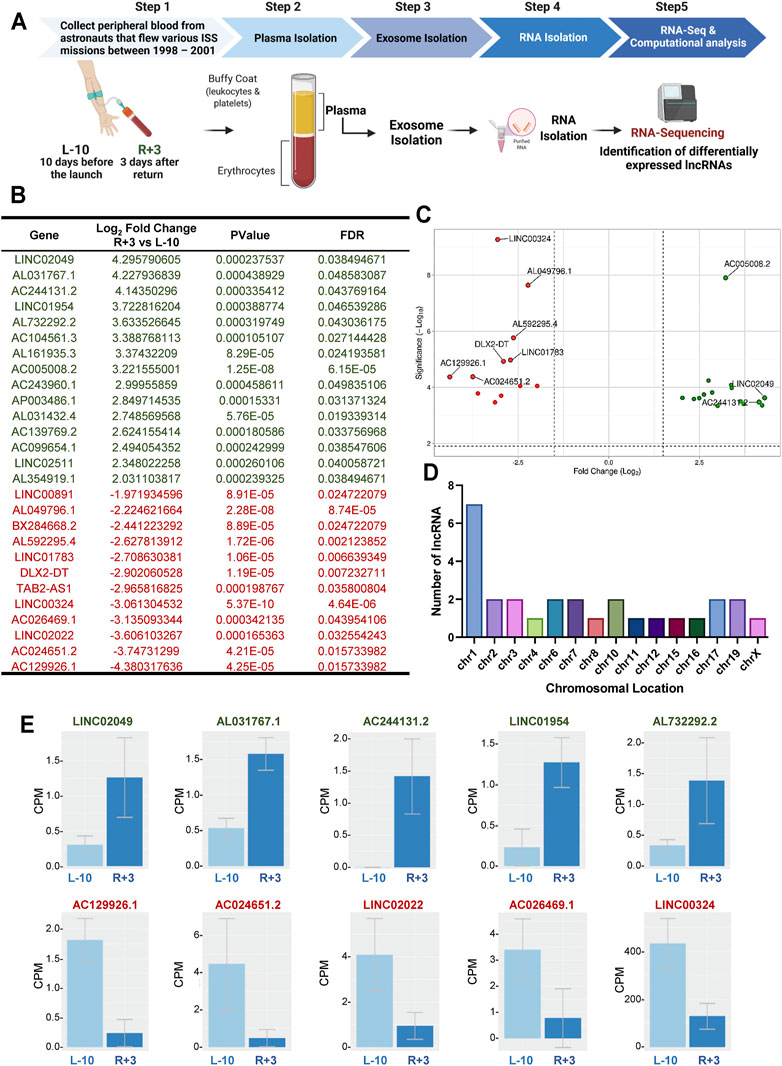 (A) Schematic representation of the experimental design. Blood was sampled at two different time points: 10 days before launch (L-10) and 3 days after return (R+3) from three different astronauts. Exosomes were isolated from blood plasma, and purified exosomal RNA was analyzed by RNA-Sequencing. (B) Computational analysis identified 27 differentially regulated lncRNA with a Log2 fold change >2, p < 0.001, and FDR <0.05, compared to baseline L-10. (C) Volcano plots showing Log2-fold changes for the 27 differentially regulated lncRNA and the statistical significance of each gene calculated after DEG analysis. Red points indicate significantly down-regulated genes; green points indicate up-regulated genes. (D) Chromosomal location of the lncRNA is shown. (E) Normalized counts, or the number of reads that align to a particular feature after correcting for sequencing depth and transcriptome composition bias, are shown for the top 5 up-regulated and down-regulated lncRNA in astronauts at L-10 and R+3.

The team of scientists analyzed RNA isolated from exosome samples of blood that came from 18 space shuttle astronauts between 1998 and 2001, including three whose samples were extremely robust.

“Because the lncRNA can modulate a large number of genes, understanding those genes and the pathways they’re associated with — such as general health or cardiovascular disease — would allow us to identify who needs to get specific medicine, change their diet or get more exercise to ward off any negative effects of spaceflight,” Coleman said.

“These kinds of studies are trying to fill the knowledge gaps to first understand the effects of working and traveling in low-Earth orbit and then of deep space on the human body.”

Nearly all past studies have focused on the effects of space on astronauts in low-Earth orbit, such as shuttle astronauts working aboard the International Space Station.

“As we move to traveling to the moon and Mars, the space environment is going to be dramatically different. There will be greater exposure to ionizing radiation and astronauts will be in space for longer periods with greater times of confinement and extended problems with gravity,” Coleman said.

While the team’s current study focuses on lncRNA, the scientists expect to publish three more papers over the next three to six months about other types of RNA identified within exosomes that also play a role in health and diseases and could furnish more information about the risks associated with spaceflight.