“Supermeres” may carry clues to cancer, Alzheimer’s disease and COVID-19

Researchers at Vanderbilt University Medical Center have discovered a nanoparticle released from cells, called a “supermere,” which contains enzymes, proteins and RNA associated with multiple cancers, cardiovascular disease, Alzheimer’s disease and even COVID-19. The discovery, reported Dec. 9 in Nature Cell Biology, is a significant advance in understanding the role extracellular vesicles and nanoparticles play in shuttling important chemical “messages” between cells, both in health and disease.

“We’ve identified a number of biomarkers and therapeutic targets in cancer and potentially in a number of other disease states that are cargo in these supermeres,” said the paper’s senior author, Robert Coffey, MD. “What is left to do now is to figure out how these things get released.”

Coffey, Ingram Professor of Cancer Research and professor of Medicine and Cell & Developmental Biology, is internationally known for his studies of colorectal cancer. His team is currently exploring whether the detection and targeting of cancer-specific nanoparticles in the bloodstream could lead to earlier diagnoses and more effective treatment.

In 2019 Dennis Jeppesen, PhD, a former research fellow in Coffey’s lab who is now a research instructor in Medicine, used advanced techniques to isolate and analyze small membrane-enclosed extracellular vesicles called “exosomes.” That year, using high-speed ultracentrifugation, another of Coffey’s colleagues, Qin Zhang, PhD, research assistant professor of Medicine, devised a simple method to isolate a nanoparticle called an “exomere” that lacks a surface coat. In the current study, Zhang took the “supernatant,” or fluid that remains after the exomeres have been spun into a “pellet,” and spun the fluid faster and longer. The result was a pellet of nanoparticles isolated from the supernatant of the exomere spin—which the researchers named supermeres.

“They’re also super-interesting,” Coffey quipped, “because they contain many cargo previously thought to be in exosomes.”

For one thing, supermeres carry most of the extracellular RNA released by cells and which is found in the bloodstream. Among other functional properties, cancer-derived supermeres can “transfer” drug resistance to tumor cells, perhaps via the RNA cargo they deliver, the researchers reported. 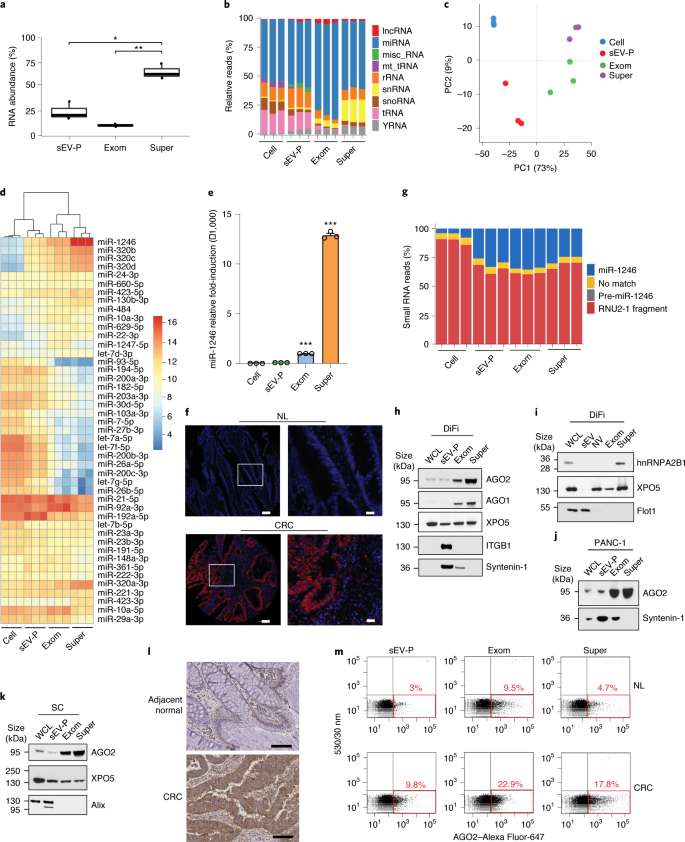 Supermeres are important carriers of TGFBI, a protein that in established tumors promotes tumor progression. TGFBI thus may be a useful marker in liquid biopsies for patients with colorectal cancer, the researchers noted. They also carry ACE2, a cell-surface receptor that plays a role in cardiovascular disease and is the target of the COVID-19 virus. This raises the possibility that ACE2 carried by supermeres could serve as a “decoy” to bind the virus and prevent infection. Another potentially important cargo is APP, the amyloid-beta precursor protein implicated in the development of Alzheimer’s disease. Supermeres can cross the blood-brain barrier, suggesting that their analysis could improve early diagnosis or possibly even targeted treatment of the disease.

“The identification of this rich plethora of bioactive molecules … raises interesting questions about the function of supermeres, and heightens interest in the potential of these particles as biomarkers for diseases,” researchers at the University of Notre Dame noted in a review published with the paper.