The cytoplasmic tyrosine kinase SRC controls cell growth, proliferation, adhesion, and motility. The current view is that SRC acts primarily downstream of cell-surface receptors to control intracellular signaling cascades. Here researchers from the Katholieke Universiteit Leuven reveal that SRC functions in cell-to-cell communication by controlling the biogenesis and the activity of exosomes. Exosomes are viral-like particles from endosomal origin that can reprogram recipient cells. By gain- and loss-of-function studies, they establish that SRC stimulates the secretion of exosomes having promigratory activity on endothelial cells and that syntenin is mandatory for SRC exosomal function. Mechanistically, SRC impacts on syndecan endocytosis and on syntenin-syndecan endosomal budding, upstream of ARF6 small GTPase and its effector phospholipase D2, directly phosphorylating the conserved juxtamembrane DEGSY motif of the syndecan cytosolic domain and syntenin tyrosine 46. This study uncovers a function of SRC in cell-cell communication, supported by syntenin exosomes, which is likely to contribute to tumor-host interactions.

Model recapitulating the relation between SRC kinase and the SDC–syntenin exosomal pathway, as revealed in the present study 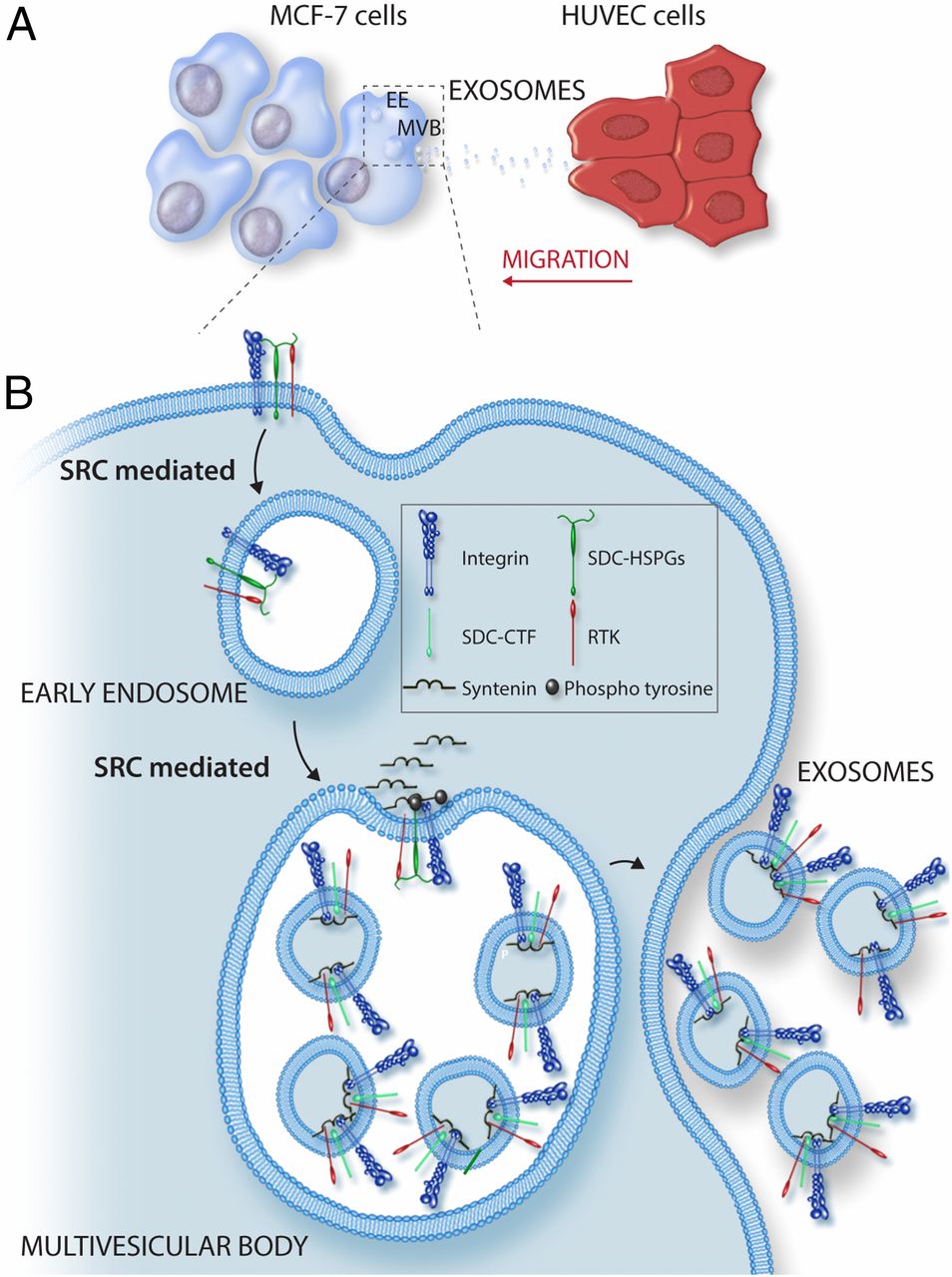 (A) The conditioned medium of MCF-7 cells has promigratory effects on HUVEC cells. This activity is mediated by exosomes and is lost upon SRC depletion and increased upon SRC gain of function in exosome donor cells. In MCF-7 cells, syntenin is mandatory for SRC promigratory effects on HUVEC cells. (B) Processes under the control of SRC. SRC acts by favoring SDC internalization and SDC–syntenin endosomal budding (upstream of ARF6/PLD2). SRC is directly phosphorylating the conserved tyrosine in the membrane proximal DEGSY motif of SDC and thereby increases the recruitment and binding of syntenin at the endosomal membrane. However, the phosphorylation of syntenin by SRC, on the tyrosine at position 46, contributes to endosomal budding and exosome release. SRC thereby influences the number of exosomes that is released and controls the loading of exosomes with cargo such as integrins and receptor tyrosine kinases, known partners of SDCs.