Exosomes are 30–120 nm membrane bound vesicles secreted naturally by almost all cells and exist in all body fluids. Accumulating evidence has shown that exosomes contain proteins, lipids, DNA, mRNA, miRNA, and lncRNA that can be transferred from producer cells to recipient cells, facilitating cell–cell communication. As the natural carrier of these signal molecules, exosomes possess many other properties such as stability, biocompatibility, biological barrier permeability, low toxicity, and low immunogenicity, which make them an attractive vehicle for therapeutic delivery. How exosomes target recipient cells in vivo remains largely unknown, however, exosomes are selectively enriched in some transmembrane proteins that can be genetically engineered to display ligands/homing peptides on their surface, which confers exosome targeting capability to cells bearing cognate receptors. With the discovery of many peptides homing to diseased tissues or organs through phage display and in vivo biopanning technologies, there is ample opportunity to explore the potential use of exosome for targeted gene therapy. Here, the authors briefly review exosome biogenesis, mechanisms of exosome-mediated cell–cell communication, and exosome isolation and purification methods, and specifically focus on the emerging exosome targeting technologies. 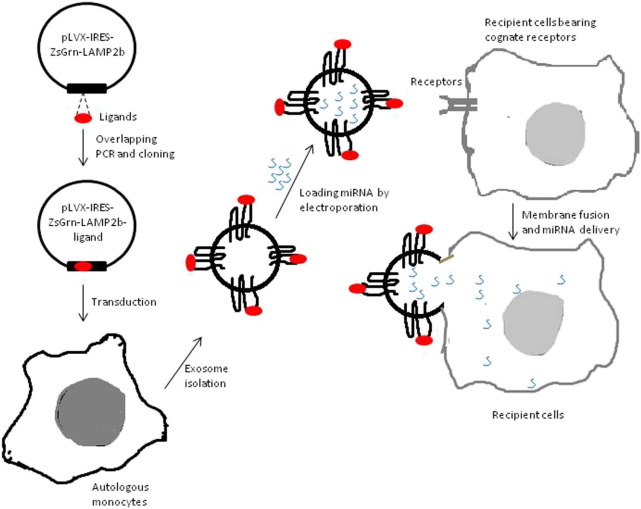 Exosome-mediated therapeutic delivery. Coding sequence of the ligand/homing peptide (in red oval) was inserted in-frame in-between the sequences of signal peptide and the mature peptide of LAMP-2b by overlapping PCR. The fusion cassette was cloned into a bicistronic lentiviral vector, pLVX-IRES-ZsGreen, forming pLVX-IRES-ZsGreen-ligand. Autologous monocytes were isolated and transduced with lentivirus encoding the ligand-LAMP2b fusion protein. Exosomes displaying the fusion protein (transmembrane protein with a red oval) on the surface will be isolated, later loaded with miRNAs (in blue). The exosomes were administered systemically, and which will travel to recipient cells bearing cognate receptors or unknown receptors in case of homing peptide. The binding of ligands and its receptors will cause membrane fusion between exosomes and recipient cells, leading to release of miRNA to the recipient cells.