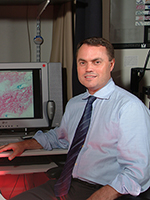 DNA fragments packaged in tumor exosomes — small tumor-secreted vesicles — can be used to identify important genetic mutations in cancer, researchers at Weill Cornell have demonstrated. Because exosomes circulate in the blood, the discovery suggests that physicians could eventually use a blood test to detect tumors and guide therapies, some of which target the proteins the cancer-associated genes produce.

Specifically, the research, published in the Nature Publishing Group journal Cell Research, shows that exosomes contain double-stranded DNA, and this double-stranded DNA represents the entire genome of the cancerous tumor from which it was derived.

Many cancers, such as BRAF-mutant melanoma and EGFR-mutant lung cancer, respond to treatment with drugs that hone in on the proteins created by these genes. Traditionally, physicians would biopsy, or remove, a section of a patient’s tumor to see if it contained these mutations.

“Our work demonstrated that DNA associated with exosomes reflects the mutational status of their donor cells, and this finding suggests the highly promising translational potential for exosomes, which can be easily obtained from a simple blood test,” said Dr. Haiying Zhang, a co-lead author of the study and an instructor of cell and developmental biology in pediatrics at Weill Cornell. 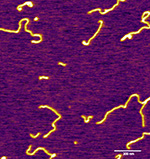 This blood test could be used to find cancers earlier, as well as monitor patients’ response to treatments, Dr. Zhang said.

The investigators also plan to study how exosomes introduce their cancerous DNA into healthy cells to better understand the way cancer spreads throughout the body.

“The discovery of double-stranded DNA in exosomes opens new directions in our understanding of how certain cancers will progress or metastasize,” said co-lead author Dr. Basant Kumar Thakur, a visiting research scholar in the Departments of Pediatrics and Cell and Developmental Biology at Weill Cornell.

The finding builds on earlier work by Dr. David Lyden and his team, who were the first to show that exosomes released by tumors can shuttle cancer-promoting proteins, or oncoproteins, into normal cells. Dr. Lyden’s group demonstrated that these tumor exosomes can travel via the blood stream and influence the cells at distant sites. There they affect cells responsible for giving rise to the immune system, coaxing these cells into helping rather than fighting tumor growth. Importantly, the researchers demonstrated that the protein cargo of cancer exosomes could predict cancer spread in patients with aggressive skin cancers.

The present work has been done over the course of five years in the laboratory of Dr. Lyden, the Stavros S. Niarchos Professor in Pediatric Cardiology and a professor of pediatrics and cell and developmental biology at Weill Cornell. To definitively demonstrate the presence of double-stranded DNA in exosomes, the investigators used both biophysical measurements of DNA within exosomes and biochemical assays. Using these approaches, the authors showed that DNA can be associated with exosomes in two forms: It can be contained within the exosome particles or it can be attached to the surface of exosomes, which may have distinct roles and utility for cancer diagnosis.

The lab is also working on ways to better collect circulating exosomes. “In the near future, optimizing the methods used to isolate DNA contained within exosomes will lead to improvements in the sensitivity and specificity of detecting exosomal DNA alterations that will prove useful in the clinical setting,” Dr. Lyden said.