Tetherin is an exosomal tether

Exosomes are extracellular vesicles that are released when endosomes fuse with the plasma membrane. They have been implicated in various functions in both health and disease, including intercellular communication, antigen presentation, prion transmission, and tumour cell metastasis. Here researchers from the University of Cambridge show that inactivating the vacuolar ATPase in HeLa cells causes a dramatic increase in the production of exosomes, which display endocytosed tracers, cholesterol, and CD63. The exosomes remain clustered on the cell surface, similar to retroviruses, which are attached to the plasma membrane by tetherin. To determine whether tetherin also attaches exosomes, the researchers knocked it out and found a 4-fold reduction in plasma membrane-associated exosomes, with a concomitant increase in exosomes discharged into the medium. This phenotype could be rescued by wild-type tetherin but not tetherin lacking its GPI anchor. They propose that tetherin may play a key role in exosome fate, determining whether they participate in long-range or short-range interactions. 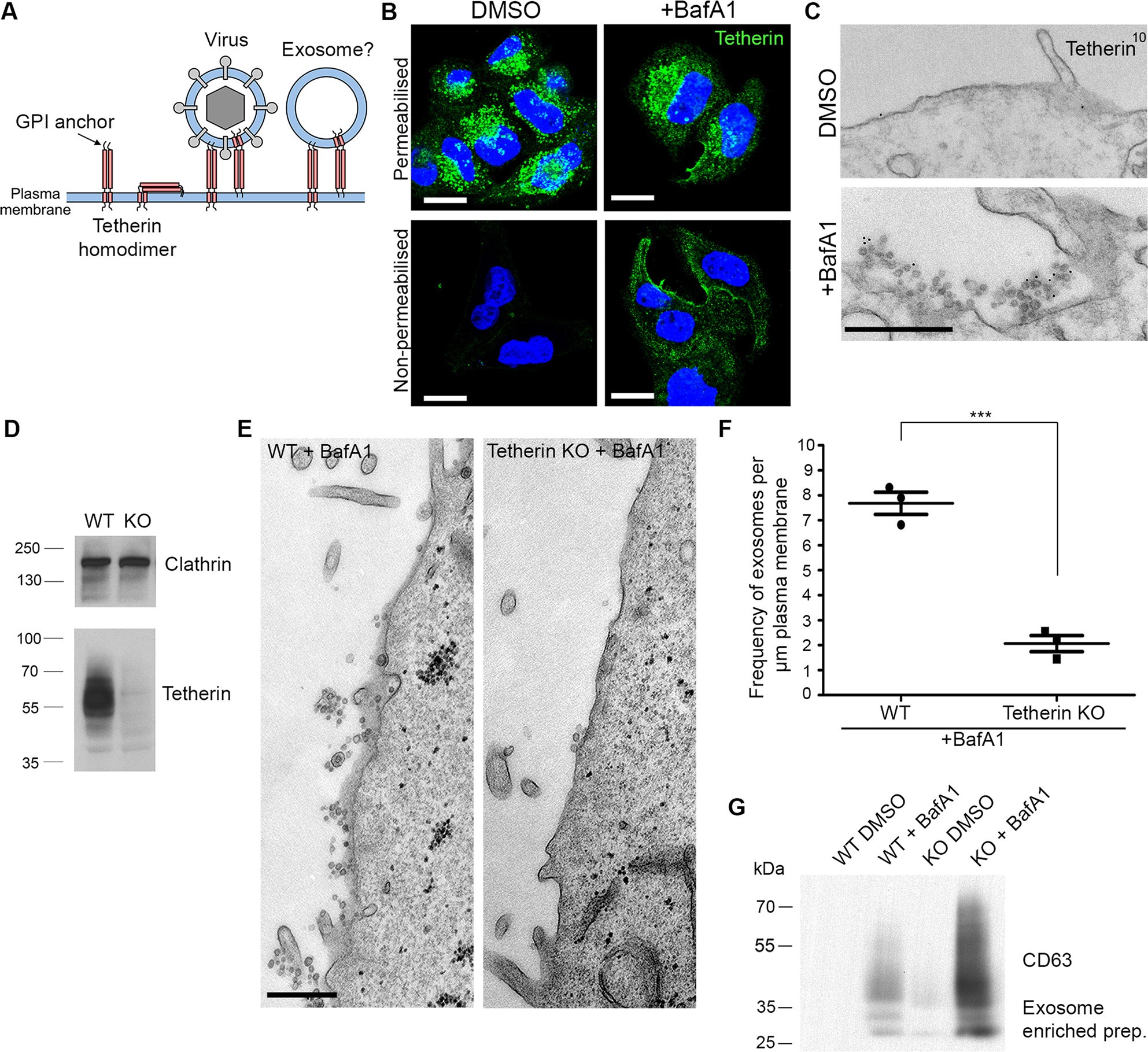 (A) Schematic diagram of tetherin. (B) Mock-treated or BafA1-treated HeLa cells (100 nM, 16 hr) were either permeabilised or left intact and stained with an anti-tetherin antibody. Scale bars: 20 μm. (C) Mock-treated or BafA1-treated HeLa cells (100 nM, 16 hr) were surface-labelled using an anti-tetherin antibody followed by 10 nm protein A-gold. Scale bar: 500 nm. (D) The tetherin gene was knocked out using CRISPR/Cas9, and the loss of tetherin in a clonal population was confirmed by Western blotting. (E) Wild-type or tetherin-knockout HeLa cells were treated with BafA1 (100 nM, 16 hr) and processed for EM to analyse exosome frequency. Scale bar: 500 nm. (F) The frequency of exosomes per μm plasma membrane in BafA1-treated (100 nM, 16 hr) wild-type or tetherin-knockout cells was calculated. The mean ± S.E.M are shown from three independent experiments. ***p<0.001. (G) Exosome-enriched preparations were generated from the culture supernatants of both wild-type and tetherin-knockout cells, either with or without BafA1-treatment (100 nM, 16 hr), and Western blots were probed with anti-CD63.