The battlefield of biomarker discovery is littered with fallen candidates

In clinical oncology, detecting and treating disease as early as possible is the brass ring to be grasped. Does a new test based on circulating exosomes bring it closer for patients with pancreas cancer?

Most solid tumors are incurable once they metastasize, making prevention and early detection primary goals. For pancreatic ductal adenocarcinoma (PDA), which is highly lethal even when resectable, the stakes and standards for early detection are even higher. This challenge was taken up recently using a novel approach based on circulating exosomes (crExos).

A subtype of extracellular membrane vesicles (EV), exosomes are formed in the endolysosomal pathway by intraluminal budding into intracellular structures known as multivesicular bodies (MVBs). Fusion of MVBs with the plasma membrane releases their enclosed vesicles extracellularly. Described over 30 years ago as a means of receptor shedding, exosomes were not recognized as more than carriers of cellular detritus until their ability to modulate immunity was revealed over a decade later. Packed with proteins and nucleic acids, exosomes can influence the biology of recipient cells with which they fuse. They can also be exploited to promote the pathophysiology of various diseases and pre-metastatic niche conditioning in malignancy. (read more…) 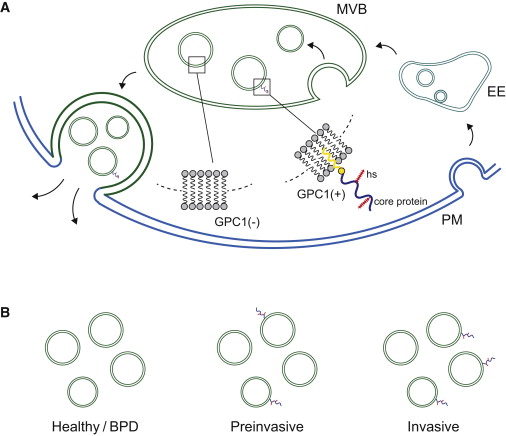 (A) Exosomes are formed by intraluminal budding as early endosomes (EE) mature into multivesicular bodies (MVB). When MVB fuse with the plasma membrane (PM), exosomes are secreted into the microenvironment and can enter the bloodstream. GPC1 is a heparan sulfate (hs) proteoglycan tethered to the surface of cells and exosomes through a specific glycophosphatidyl linkage (yellow).

(B) Melo et al. (2015) report that GPC1+ circulating exosomes are frequent in the sera of patients with preinvasive and invasive pancreas cancer but rare in healthy patients and those with benign pancreatic disease (BPD).