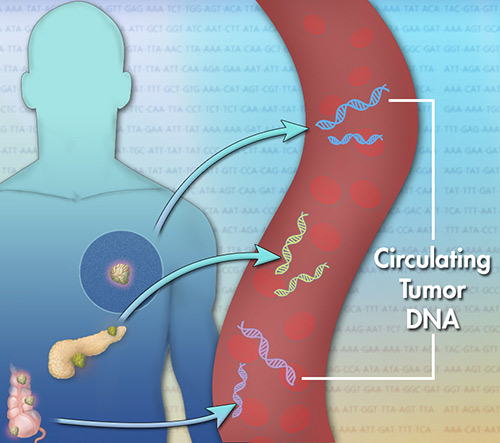 The term “biopsy” frequently evokes fear in patients, as the procedure is most often associated with cancer screening. Nevertheless, patient fears about biopsies are not wholly unwarranted and not simply due to the possible prognosis. The actual procedure itself is often terrifying to patients. While many biopsies are outpatient procedures, most are extremely invasive, requiring the surgical excision of suspect tissues, which can lead to hazardous and painful complications.

Sadly, for many cancer patients biopsies are a necessary procedure to facilitate predictive tests before treatment and often as diagnostic tools during drug intervention or post-surgical elimination of the perceived cancerous borders of a tumor. However, a hallmark of cancer is its ability to grow and evolve rapidly—attributable to the complex heterogeneity that constitutes most tumors. In a practical sense, this means that if a tumor biopsy is taken before a treatment regimen, that by the time the drug course is completed, there is a high probability that the cancer has already evolved, often becoming resistant to an entire class of chemotherapeutic compounds and rendering the information from the original biopsy obsolete.

This paradigm of invasiveness and lack of real-time data are drawbacks that oncologists and clinical researchers have, to their credit, been dealing with for decades when designing treatment courses for cancer patients. But, what if it were possible to detect, diagnose, and track various cancers in real time from a small blood sample? Would that open up new treatment options and provide better care? The stakeholders in the burgeoning field of liquid biopsy tests think so, and a number of biotech companies are jumping head first into the diagnostic pool, hoping to leverage their strengths in developing simple assays for detecting cancer biomarkers.

“Liquid biopsy is still a new field with many challenges,” explains Peter Krein, Ph.D., senior director for medical and scientific affairs at Qiagen. “The first challenge is to ensure a highly sensitive, isolation and extraction method is used, to guarantee low abundance material originating from the tumor tissue is properly separated from a much higher concentration of normal cells and genomes.”

As early as 1948, some five years before Watson and Crick published their landmark paper describing the structure of DNA, researchers had already identified the presence of cell-free circulating nucleic acids (cfNAs). Almost 30 years later, scientists observed that cancer patients had higher plasma levels of circulating DNA than healthy controls. Yet, it wasn’t until 1994 when fragments of the mutant RAS gene were found in blood samples of cancer patients, that there was greater attention paid to circulating tumor DNA (ctDNA). Fast forward two decades later and our ability to capture, detect, and sequence ctDNA affords us the real possibility of using this genetic material as a sensitive and accurate diagnostic tool.

Concomitantly, in the past several years researchers have discovered the value of being able to capture cancer cells that have broken off from the primary tumor and migrated into the systemic circulation—the so-called circulating tumor cells or CTCs. Capturing intact malignant cells hold some key advantages over ctDNA, such as the ability to simultaneously analyze genomic DNA mutations, genomic transcripts in the form of mRNA, and protein markers. However, the main drawback for utilizing CTCs as a cancer diagnostic is an extremely low frequency with which they occur, ranging between 1–10 cells/mL of whole blood for patients with metastatic cancer, i.e., the veritable needle in a haystack scenario. Yet, many companies have developed extremely clever microfluidic capturing devices in order to enrich blood samples for CTCs.

In some ways, the liquid biopsy field is similar to those two relatives who insist on fighting over which part of the turkey is better, the old dark meat vs. white meat debate (everyone knows dark meat tastes best, right?). Though, in this particular case, scientists struggle with which method would make for the better test: ctDNA (molecular) vs. CTCs (cell).

“Both liquid biopsy opportunities are important and complementary at the time being,” remarks Dr. Krein. “ctDNA might make it faster for certain applications, but CTCs will get a strong backbone for overall drug development and companion diagnostics.

Since both approaches harness the ever-expanding power of massively parallel sequencing techniques (next-gen sequencing or NGS), it’s not difficult to see why methodologies that are searching for ctDNA are becoming a reality quicker than those relying on CTCs. The number of cancerous cells that die off and shed their genetic contents into patients’ bloodstream is far greater than intact rogue cells that make it into circulation. Moreover, the process of isolating ctDNA is currently a much more simple process than isolating single intact tumor cells.

However, with single-cell sequencing techniques rapidly ascending as the preferred sequencing choice for various forms of cancer—due to studies pointing to the tremendous amount of genetic heterogeneity among tumor samples—the amount of relevant information about a patient’s tumor could be exponentially greater from CTCs isolates.

“Each technology has different strengths and shortcomings,” notes Raaj Trivedi, vp of commercial operations at Biocept. “Recently, published data suggest that both technologies can be used in a complementary fashion. Biocept’s experience in the liquid biopsy space would suggest the same.” Trivedi continues, stating that “genetic mutations can be detected using ctDNA platforms—however detection of important structural genetic alterations such as fusions, copy number changes, and even protein expression changes may not be feasible using ctDNA platforms. Since CTC platforms capture intact whole tumor cells reflective of the current tumor burden and biomarker status in a patient, it allows for rapid noninvasive identification of tumors’ evolving mutational landscape.”

John Leite, Ph.D., vice president of oncology at Illumina, agrees stating that “there is certainly room for both; I believe they answer different questions. In the near term, we will see a number of clinical studies that assign patients to trial arms based on ctDNA results. That means that in the next few years we will see a significant increase in the number of drugs that utilize ctDNA detection as a companion diagnostic.”

Where the rubber meets the road is the applicability of liquid biopsies in a daily clinical environment. Sensitivity, reproducibility, and target validation are all areas that still thwart efforts for these procedures for becoming clinical commonplace. Yet, many researchers and biotech companies have become emboldened by data from representative studies that continue to point toward the necessity of these tests for cancer patients, especially when it provides clinicians the ability to track tumorigenesis in real time.

“Liquid biopsies are transitioning faster [into the clinical realm] for some diseases. For example, obtaining tumor material through a traditional biopsy can pose a risk for patients with a lung cancer diagnosis,” says Trivedi. “This is the perfect clinical scenario where a liquid biopsy helps.”

“Given the challenges of testing a limited amount of tissue biopsy material with an ever-increasing number of genetic markers, we feel a strong sense of urgency from customers to include ctDNA and CTCs into their clinical studies to demonstrate clinical utility,” Dr. Leite added.

Many clinical researchers still feel that definitive cancer diagnostics will always require some level of histological assessment, which may well be the case. However, much of this sentiment may stem, in part, from the apparent shortage of reproducible results, a lack of unanimity about test accuracy, and real data showing that the tests help to extend patient lifespan. Moreover, most insurance companies are not currently reimbursing for liquid biopsies, labeling them as experimental, not medically necessary, and go so far as to call them unproven.

A Test for All Seasons

Many investigators and biotech groups, however, are still optimistic about the future of liquid biopsies. The collective feeling is that they are on the verge of breakthroughs in sensitivity that will alleviate many of the concerns for this diagnostic tool, which will help change the perception of the test as a laboratory experiment into a valid clinical tool.

“As research continues to develop using liquid biopsy we expect to see the development of new and more sensitive methods. We expect these methods to be used increasingly for the detection of emergent mutations following therapeutic intervention in cancer and work toward early detection of cancer,” says Dr. Krein. “Additionally, we expect to see further significant developments in fields such as noninvasive prenatal testing, inflammatory disorders, and pharmacogenetics.”

Innovation for liquid biopsy applications is bounding as researchers continue to find exciting new ways to utilize this versatile method. For example, a recent study analyzed tumor-educated platelets—those that had taken up genetic molecules shed by tumors—using next-gen RNA sequencing (RNA-Seq) to predict a cancer diagnosis among numerous patients. The novel approach was not only able to distinguish between various types of common cancers, it was also able to determine the location of the primary tumor, and identify tumors carrying mutations that would have an impact on therapeutic decision-making.

In another recently published analysis, investigators tested the validity of using liquid biopsies to predict and track various brain tumors. The researchers used the test in a similar manner as would be done for any other cancer, except instead of drawing blood samples for analysis, cerebrospinal fluid was extracted, allowing the investigators to detect aggressive brain tumors such as glioblastoma multiforme.

It still may take some time before liquid biopsies supplant current invasive techniques. However, as methods and instrumentation continue to improve and test validation parameters are universally adopted, we should soon begin to see more liquid biopsy procedures in the clinical space for monitoring disease progression and complementing traditional prognostic techniques—making them an invaluable addition to the precision medicine arsenal.