The emerging role of exosomes in mental disorders

Exosomes are a class of extracellular vesicles of endocytic origin, which are released by cells and are accessible in biofluids, such as saliva, urine, and plasma. These vesicles are enriched with small RNA, and they play a role in many physiological processes. In the brain, they are involved in processes including synaptic plasticity, neuronal stress response, cell-to-cell communication and neurogenesis. While exosomes have been implicated previously in cancer and neurodegenerative diseases, research regarding their role in mental disorders remains scarce. Given their functional significance in the brain, investigation in this field is warranted. Additionally, because exosomes can cross the blood-brain barrier, they may serve as accessible biomarkers of neural dysfunction. Studying exosomes may provide information towards diagnosis and therapeutic intervention, and specifically those derived from the brain may provide a mechanistic view of the disease phenotype. McGill University researchers discuss the roles of exosomes in the brain, and relate novel findings to current insights into mental disorders.

The role of exosomes in the brain 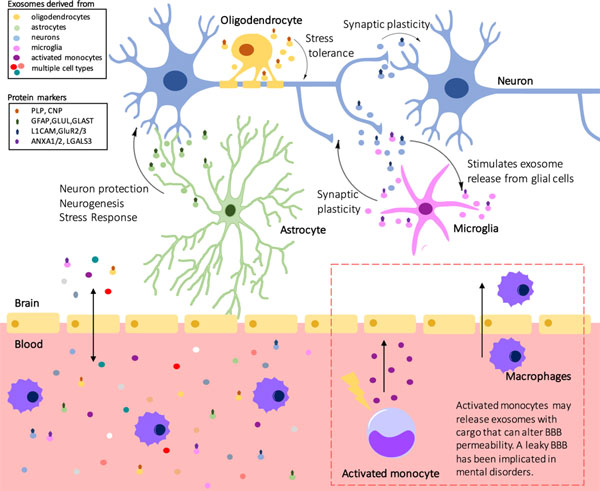 Exosome signalling is involved in many physiological brain processes. Changes in many of these processes have been previously associated in mental disorders. For example, activated monocytes release exosomes that can influence BBB permeability. A leaky BBB is associated with neuroinflammation, and has been previously implicated in schizophrenia, bipolar disorder, and major depressive disorder. Additionally, exosomes carry markers from parent cells that may help them be distinguishable in biofluids.