Chemoresistance is one of the major obstacles in the treatment of cancer patients. It poses a fundamental challenge to the effectiveness of chemotherapy and is often linked to relapse in patients. Chemoresistant cells can be identified in different types of cancers; however, ovarian cancer has one of the highest rates of chemoresistance-related relapse (50% of patients within 5 years). Resistance in cells can either develop through prolonged cycles of treatment or through intrinsic pathways. Mechanistically, the problem of drug resistance is complex mainly because numerous factors are involved, such as overexpression of drug efflux pumps, drug inactivation, DNA repair mechanisms and alterations to and/or mutations in the drug target. Additionally, there is strong evidence that circulating miRNAs participate in the development of chemoresistance. Recently, miRNAs have been identified in exosomes, where they are encapsulated and hence protected from degradation. These miRNAs within exosomes (exo-miRNAs) can regulate the gene expression of target cells both locally and systemically. Exo-miRNAs play an important role in disease progression and can potentially facilitate chemoresistance in cancer cells. In addition, and from a diagnostic perspective, exo-miRNAs profiles may contribute to the development of predictive models to identify responder and non-responder chemotherapy. Such model may also be used for monitoring treatment response and disease progression. Exo-miRNAs may ultimately serve as both a predictive biomarker for cancer response to therapy and as a prognostic marker for the development of chemotherapy resistance. Researchers from the University of Queensland review the potential role of exo-miRNAs in chemotherapy in ovarian cancer. 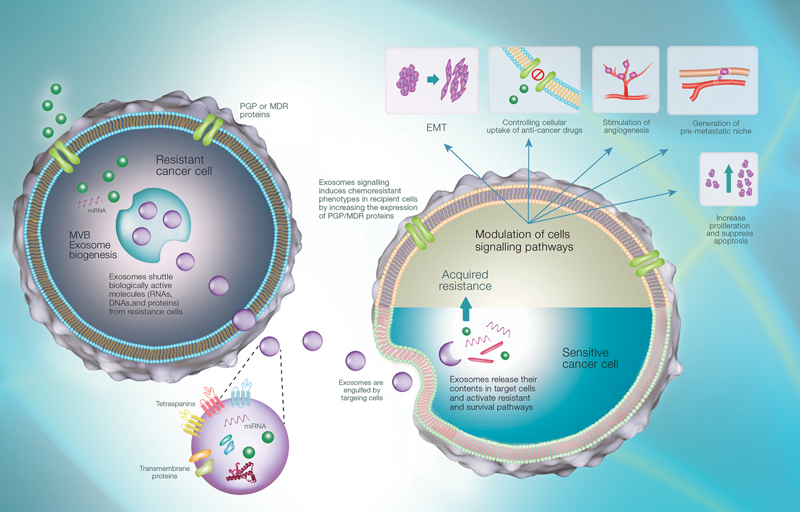 The heterogeneity and diversity of ovarian tumor cells in the tumor micro-environment is presented and some of the cells are resistance and other are sensitive to anti-cancer drugs. When cancer cells are treated with chemo drugs, the resistant cells survive because of their inherent chemoresistance which may lead to a relapse of the disease. The transmission of resistant phenotype derived from resistant cells via exosomes may cause acquired chemoresistance that transforms sensitive cells in resistance. These exosomes contain molecular factors including RNAs (e.g. miRNAs and mRNAs), proteins (e.g. transmembrane proteins, and cytosolic proteins) and cytosol from the originating cells. These factors may modulate the response of sensitive cancer cells to chemo drugs, which leads to the activation of several pathways involving in expression of chemoresistance proteins, controlling the cellular uptake of chemodrugs, increasing the progression of cancer, EMT, and metastasis.