The role of exosomal shuttle RNA (esRNA) in lymphoma 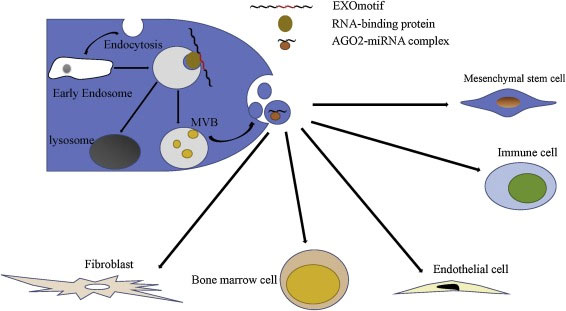 Lymphoma is a common primary hematologic malignancy of lymph nodes or other lymphoid tissues which can occur at any age. Exosomes are small membrane vesicles which emerge as a novel intercellular communication method and play an important role in the tumor proliferation and metastasis. Some ribonucleic acids, including mRNA, microRNA, long non-coding RNA and circle RNA, can be functionally transferred between cells via exosomes and are called ‘exosomal shuttle RNA (esRNA)’. A growing body of evidences have shown that esRNA mediate a variety of pathological conditions related to the lymphoma development, progression and therapeutic failures. Researchers from the Fudan University Shanghai Cancer Center review the role of exosomes, with the focus on the role of exosomal shuttle RNA (esRNA) in lymphoma. The importance of esRNA in the pathogenesis, progression, drug resistance and the prospect of clinical application will be discussed in detail.