The role of exosome-derived microRNAs as markers, mediators, and therapies for type 2 diabetes

The prevalence of diabetes mellitus (DM) is increasing at a staggering rate around the world. In the United States, more than 30.3 million Americans have DM. Type 2 diabetes mellitus (T2DM) accounts for 91.2% of diabetic cases and disproportionately affects African Americans and Hispanics. T2DM is a major risk factor for cardiovascular disease (CVD) and is the leading cause of morbidity and mortality among diabetic patients. While significant advances in T2DM treatment have been made, intensive glucose control has failed to reduce the development of macro and microvascular related deaths in this group. This highlights the need to further elucidate the underlying molecular mechanisms contributing to CVD in the setting of T2DM.

Endothelial dysfunction (ED) plays an important role in the development of diabetes-induced vascular complications, including CVD and diabetic nephropathy (DN). Thus, the endothelium provides a lucrative means to investigate the molecular events involved in the development of vascular complications associated with T2DM. microRNAs (miRNA) participate in numerous cellular responses, including mediating messages in vascular homeostasis. Exosomes are small extracellular vesicles (40-160 nanometers) that are abundant in circulation and can deliver various molecules, including miRNAs, from donor to recipient cells to facilitate cell-to-cell communication. Endothelial cells are in constant contact with exosomes (and exosomal content) that can induce a functional response. Researchers at Howard University College of Medicine discuss the modulatory role of exosomal miRNAs and proteins in diabetes-induced endothelial dysfunction, highlighting the significance of miRNAs as markers, mediators, and potential therapeutic interventions to ameliorate ED in this patient group. 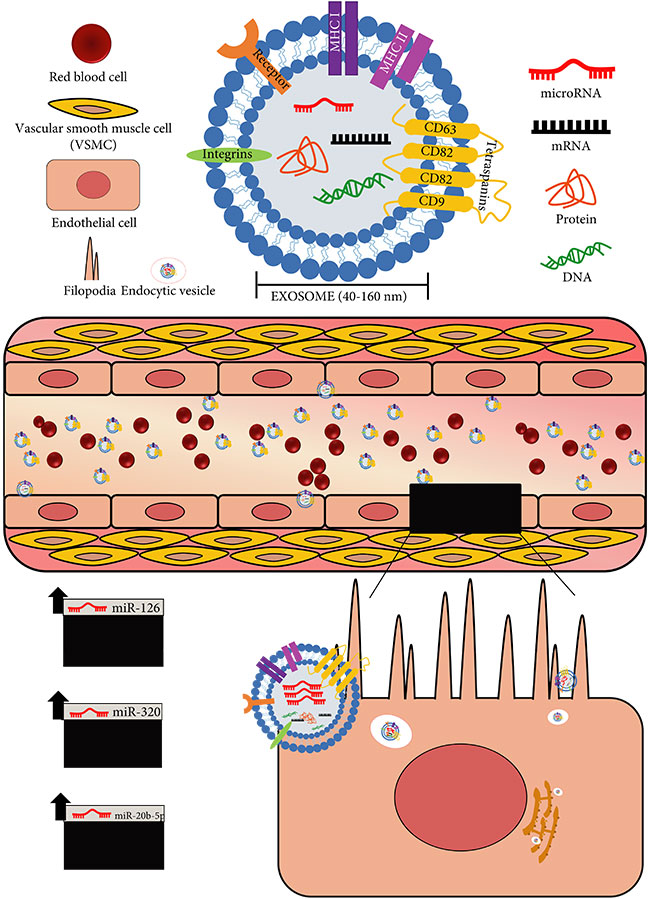 Exosomes (40-160 nm) function in cell-to-cell communication via transfer of exosomal content (i.e., miRNAs, proteins, mRNA, and DNA) to neighboring or distant cells. Exosomes can be recruited to the endothelial cell body by filopodia surfing. They are then internalized and shuttled within endocytic vesicles and scan the endoplasmic reticulum and allow for entry of exosomal miRNA cargo into RNAi translation machinery to induce a functional response . For example, miR-126 functions to improve vascular tone. However, a reduction in miR-126, as often reported in T2DM, worsens vascular tone and endothelial function. Exosomal enrichment of miR-320 and miR-20b-5p impairs endothelial proliferation and angiogenesis. Thus, the uptake of exosomes enriched with certain miRNAs can impair endothelial function and further accelerate the microvascular complications associated with type 2 diabetes mellitus.