The role of exosomes in myocardial remodeling

Exosomes are nanovesicles released from cells through exocytosis and are known to be mediators of proximal as well as distant cell-to-cell signaling. They are surrounded by a classical bilayered membrane with an exceptionally high cholesterol/phospholipid ratio. Exosomes were first described in 1977, then named prostasomes, and in 1987 the name exosome was coined. Exosomes contain surface proteins, some of which can act as labels in order to find their target cells. Exosomes also contain messages in the form of proteins and nucleic acids (RNA and DNA) that are transferable to target cells. Little is known and written about cardiac exosomes, although Gupta and Knowlton described exosomes containing HSP60 in 2007. It is now known that exosomes from cardiomyocytes can transfect other cells and that the metabolic milieu of the parental cell decides the quality of exosomes released such that they induce differential gene expression in transfected cells. Future clinical use of exosomes in diagnosis, monitoring disease progress, and treatment is promising. 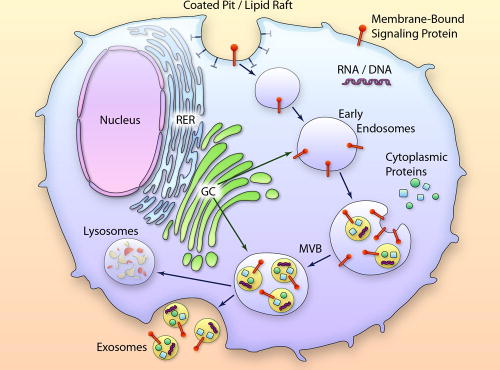 Read more about exosomes in this issue of Circulation Research: