Alpha-synuclein (α-Syn) aggregates are the main component of Lewy bodies, which are the characteristic pathological feature in Parkinson’s disease (PD) brain. Evidence that α-Syn aggregation can be propagated between neurones has led to the suggestion that this mechanism is responsible for the stepwise progression of PD pathology. Decreasing α-Syn expression is predicted to attenuate this process and is thus an attractive approach to delay or halt PD progression.

Researchers from the University College London have used α-Syn small interfering RNA (siRNA) to reduce total and aggregated α-Syn levels in mouse brains. To achieve widespread delivery of siRNAs to the brain they have peripherally injected modified exosomes expressing Ravies virus glycoprotein loaded with siRNA. Normal mice were analyzed 3 or 7 days after injection. To evaluate whether this approach can decrease α-Syn aggregates, they repeated the treatment using transgenic mice expressing the human phosphorylation-mimic S129D α-Syn, which exhibits aggregation. In normal mice the researchers we detected significantly reduced α-Syn messenger RNA (mRNA) and protein levels throughout the brain 3 and 7 days after treatment with RVG-exosomes loaded with siRNA to α-Syn. In S129D α-Syn transgenic mice we found a decreased α-Syn mRNA and protein levels throughout the brain 7 days after injection. This resulted in significant reductions in intraneuronal protein aggregates, including in dopaminergic neurones of the substantia nigra. This study highlights the therapeutic potential of RVG-exosome delivery of siRNA to delay and reverse brain α-Syn pathological conditions. 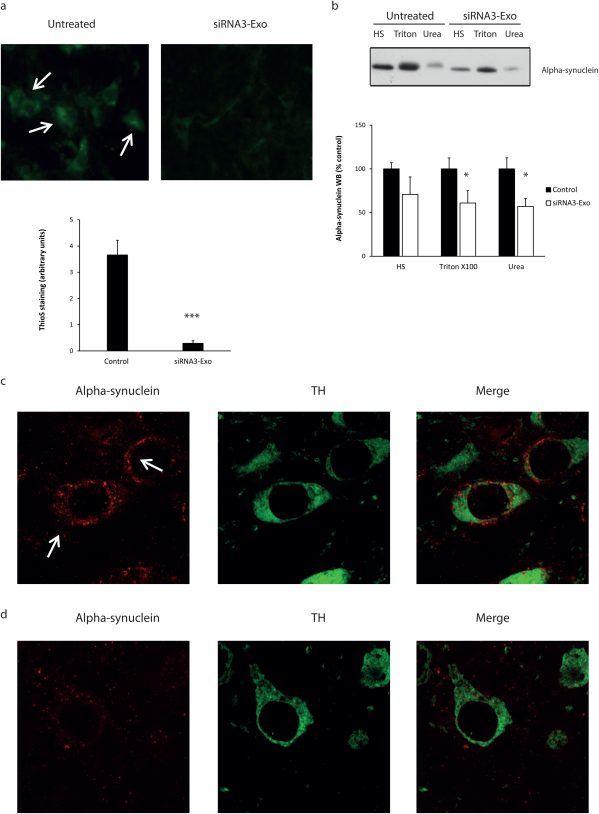