Much-needed framework for isolating extracellular vesicles filled with molecular information about the states of diseases from blood paves the way to non-invasive “liquid biopsies”. 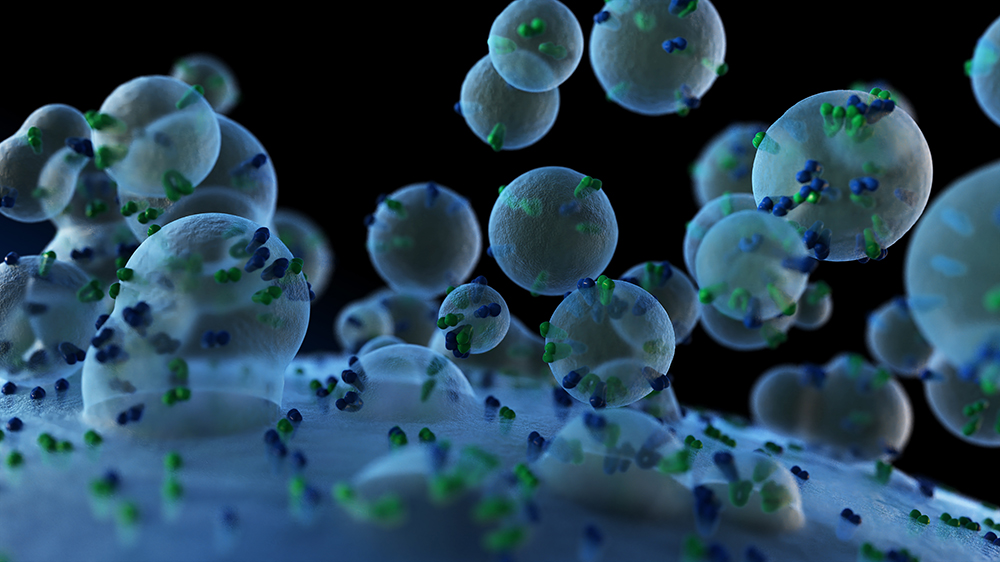 Extracellular vesicles (EVs), tiny membrane-enclosed spheres shed by virtually all cells in the human body, carry a wealth of molecular information that could be analyzed for biomarkers reporting on the state of diseases, including neurological diseases of the brain. Retrieved from blood and other biofluids EVs could become the basis of “liquid biopsies” that can be readily obtained from patients without the need for invasive procedures. Credit: Shutterstock/Jason Drees

A collaborative research effort at the Wyss Institute led by its Core Faculty members David Walt, Ph.D. and George Church, Ph.D. has developed new tools to measure and isolate tiny membrane-enclosed extracellular vesicles (EVs), which are shed by all cells in the body. EVs carry molecular cargo from their tissues of origin that could be used to diagnose diseases, including neurological diseases and brain cancers. The team, supported by the Chan Zuckerberg Initiative’s Neurodegenerative Challenge Network and Open Philanthropy, pursues strategies with which to detect signs of Parkinson’s and Alzheimer’s disease at their earliest stages and as they continue to develop. Their work, published in eLife, enables a systematic analysis of EV isolation methods from plasma and cerebrospinal fluid, an important step toward diagnosing diseases of the brain and other organs.

“Sensitive tests are needed with the power to provide actionable molecular information about the state of many diseases from sites in the body that are difficult-to-reach and currently require invasive biopsy procedures. Such tests would not only allow clinicians to start available therapies as early as possible, which usually maximizes their effects, but, importantly, would also facilitate the ability to track the effects of new drug candidates in clinical trials in individual patients over time,” said Walt, who corresponded the study.

The fight against many neurological disorders, for which no diagnostic assays are available, would significantly benefit from this ability, since brain biopsies cannot be obtained from living patients.

Walt also is the Hansjörg Wyss Professor of Biologically Inspired Engineering at Harvard Medical School (HMS), Professor of Pathology at Brigham and Women’s Hospital, and a Howard Hughes Medical Institute (HHMI) Professor; and Church is also Professor of Genetics at HMS and Professor of Health Sciences and Technology at Harvard and MIT.

For years, researchers have been envisioning “liquid biopsies” to extract molecular information about inaccessible organs from tiny EVs, which are merely about 100 nm in diameter, circulate through the blood, and contain proteins, lipids and nucleic acids such as fragments of messenger RNA (mRNA) molecules or small RNA species known as microRNAs (miRNAs) transcribed from the DNA of cells. Since the levels of RNA and other molecules provide extensive information about the state of the cells that originate from both healthy and diseased organs, EVs represent a rich, easily accessible source of molecular information that could be used to diagnose diseases.

“The major challenge in this burgeoning field is the lack of a consensus on how to isolate EVs from biofluids. Their abundance is very low, actually much lower than that of similarly sized protein aggregates and lipoproteins that also circulate in blood, and usually are co-isolated, which means that they cannot be easily purified,” said co-first author Dima Ter-Ovanesyan, Ph.D., a Wyss Research Scientist working with Church and Walt who spearheads the project together with co-first author Maia Norman, an M.D.-Ph.D. graduate student on Walt’s team. “As a requirement for working out an effective strategy to get hold of EVs, we first needed to have a sensitive way to quantitatively measure these particles.”

“To be able to measure EVs, we developed highly sensitive assays known as Simoa assays, which detect three biomolecules, called tetraspanins, that are variably present on the surface of most EVs. In addition, we also established a Simoa assay to measure albumin, the main free protein contaminant of EV preparations that compromises their usefulness as a source for molecular information,” said Norman.

In a previous study, the team had used the same type of assay to exclude a widely used candidate surface protein, L1CAM, as a target to isolate brain-specific EVs, which caused the field to reconsider the validity of a range of brain diagnostic approaches it had been focused on.

Simoa is a digital version of the often-used ELISA assay, which allows researchers to capture a protein of interest with a specific antibody molecule that is linked to a magnetic bead much larger in size than the antibody itself. Together with the protein, the entire EV which it is a part of is picked up by the antibody. The bound protein (and associated EV) is then detected with a second antibody that produces a fluorescent signal. By thus “sandwiching” the tetraspanins with the two antibodies in individual wells of a multi-well plate that each can only fit one magnetic bead, Simoa enables the digital counting of the captured EVs at a single-molecule level, which far surpasses the sensitivity of conventional ELISA assays. 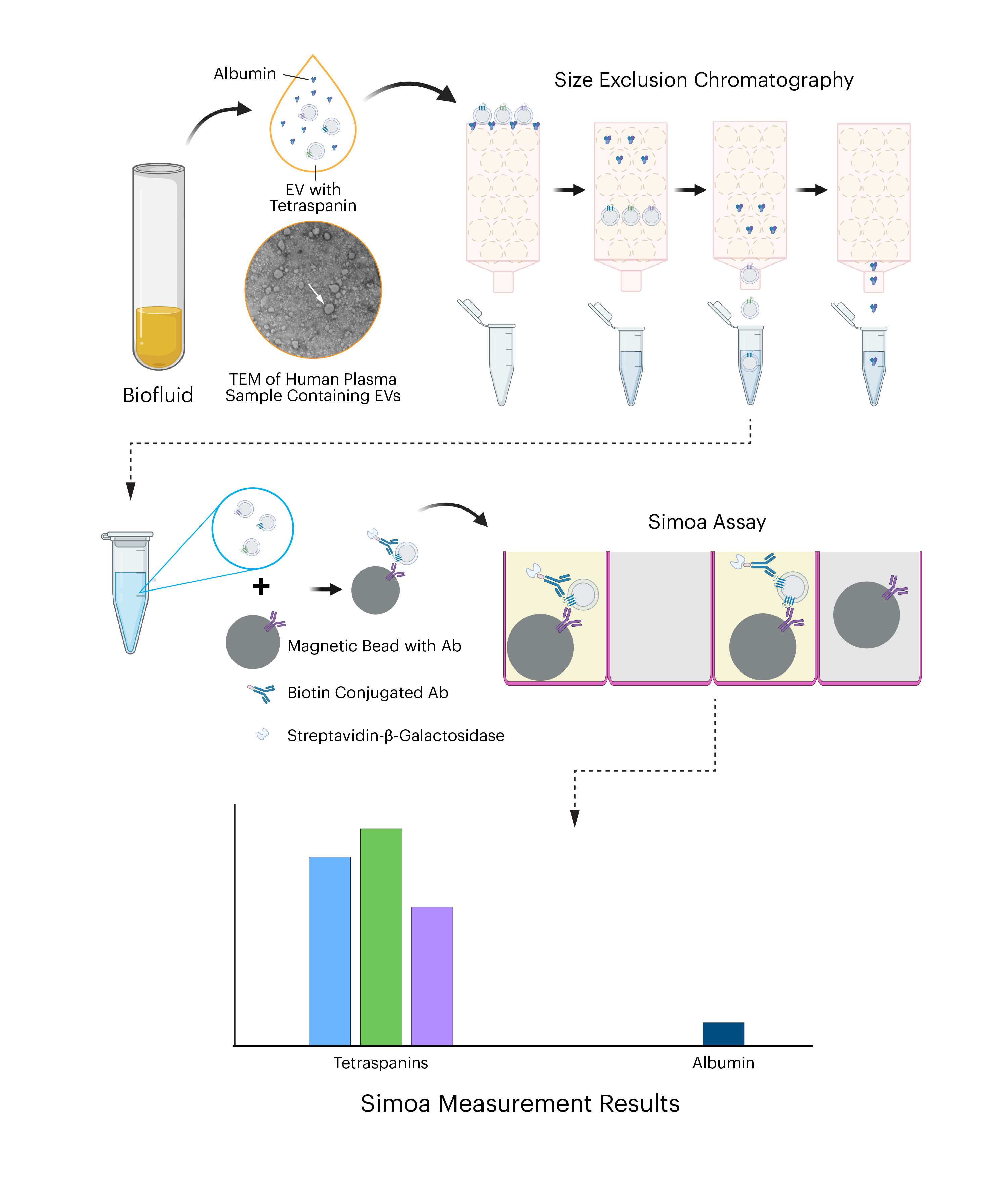 This illustration explains how extracellular vesicles (EVs) carrying molecular information about the state of diseases can be obtained from a sample of biofluid (left on the top). First, EVs are separated from other components present in biofluids by a method known as size exclusion chromatography (SEC) in which they are loaded onto columns filled with a matrix of porous beads, and retrieved in only a few eluted fractions. Then EVs are measured using ultrasensitive Simoa assays: after sandwiching them with two different antibodies binding to specific molecules on their surface, a single EV is isolated into an individual well of a multi-well plate where they can be visualized with a color reaction and counted with digital precision. By measuring the main interfering blood protein albumin in parallel, this combinatorial procedure also allows to determine the purity of isolated EVs in fractions collected from the SEC columns. Credit: Wyss Institute at Harvard University

Having developed their Simoa assays for the three tetraspanins CD9, CD63, and CD81, as well as albumin as a reliable read-out for captured EVs and their purity, the researchers identified an effective method to isolate EVs from cerebrospinal fluid (CSF), as well as blood, which is much more complex.

“We compared different isolation methods that either involved high-speed centrifugation (ultracentrifugation) to sediment EVs, precipitating them with chemicals, or separating them from other molecular structures based on their size using a biochemical approach known as size exclusion chromatography (SEC), by measuring the purity and yield of the obtained EVs using our Simoa assays,” said Ter-Ovanesyan. “SEC turned out to be the most effective method for purifying EVs from both CSF and blood plasma.”

“After having used commercially available SEC columns, we decided to dig in deeper by customizing our own SEC columns with different resins and lengths. This provided a roadmap of combinations that allow us to obtain maximum yields with high but sub-maximum purity, or the maximum purity of EVs with slightly reduced yields,” explained Norman.

“This analysis brings us a critical step closer to being able to identify EVs from patients with a wide variety of disorders. In future work toward liquid biopsies, we aim to develop additional assays for discriminating EVs that are derived from the brain and will look for disease-relevant biomarker signatures in them,” said Walt.