Exosomes (EXs) have been increasingly recognized as natural nanoscale vehicles for microRNA (miRNA)-based cell-cell communication and an ideal source of miRNA biomarkers in bodily fluids. Current methods allow bulk analysis of the miRNA contents of EXs, but these approaches are not suitable for the in situ stoichiometry of exosomal miRNAs and fail to reveal phenotypic heterogeneity at the single-vesicle level. This study aimed to develop a single vesicle-based, mild, precise, but versatile method for the in situ quantitative and stoichiometric analysis of exosomal miRNAs.

Researchers at Hong Kong Baptist University have developed a total internal reflection fluorescence (TIRF)-based single-vesicle imaging assay for direct visualization and quantification of the single-vesicles of EXs and their miRNA contents in serum microsamples. The assay uses co-delivery of inactive split DNAzymes and fluorescence-quenched substrates into nanosized EXs treated with streptolysin O to produce a target miRNA-activated catalytic cleavage reaction that amplifies the readout of fluorescence signal. The researchers perform the in situ quantitative and stoichiometric analysis of serum exosomal hsa-miRNA-21 (miR-21), a common cancer biomarker, by using the developed TIRF imaging assay. 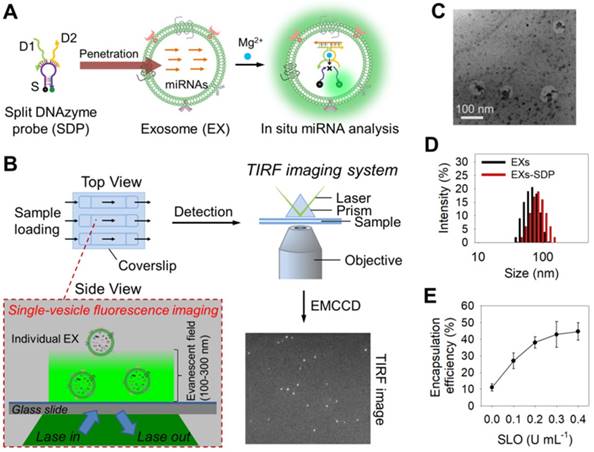 (A) Illustration of the in situ analysis of exosomal miRNAs by using the SDP. (B) Schematic illustration of the single-vesicle fluorescence imaging with TIRF microscopy. In the TIRF image, the fluorescence signal from a single EX was visualized as an individual bright spot. (C) TEM image of isolated A375 EXs. (D) Hydrodynamic diameters of A375 EXs before and after SDP penetration detected by DLS. (E) SLO-mediated penetration of fluorescent DNA probes into A375 EXs.

The created TIRF imaging platform shows high applicability to serve as a universal and useful tool for the single-vesicle in situ quantitative and stoichiometric analysis of other disease-associated exosomal miRNAs markers and provide valuable insight into the physiological relevance of EX-mediated miRNA communication.