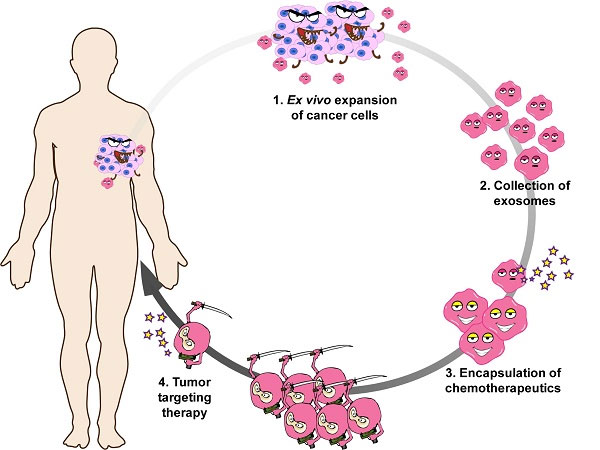 Cancer is the second leading cause of death worldwide and patients are in urgent need of therapies that can effectively target cancer with minimal off-target side effects. Exosomes are extracellular nano-shuttles that facilitate intercellular communication between cells and organs. It has been established that tumor-derived exosomes contain a similar protein and lipid composition to that of the cells that secrete them, indicating that exosomes might be uniquely employed as carriers for anti-cancer therapeutics.

North Carolina State University researchers isolated exosomes from two cancer cell lines, then co-cultured each type of cancer cells with these two kinds of exosomes and quantified exosome. HT1080 or Hela exosomes were systemically injected to Nude mice bearing a subcutaneous HT1080 tumor to investigate their cancer-homing behavior. Moreover, cancer cell-derived exosomes were engineered to carry Doxil (a common chemotherapy drug), known as D-exo, were used to detect their target and therapeutic efficacy as anti-cancer drugs. Exosome proteome array analysis were used to reveal the mechanism underly this phenomenon.