from the Daily Bruin by Deanna Necula

Researchers use salivary diagnostics to detect biomarkers in saliva, such as RNA and proteins, that can identify health concerns.

“(Salivary diagnostics) is now one of the hottest areas of biomedical research,” said David Wong, associate dean for research at the UCLA School of Dentistry.

Wong said UCLA is a leading contributor to research in salivary diagnostics. In 2014, his lab found salivary diagnostic tests are almost 100 percent accurate in detecting gene mutations responsible for lung cancer in patients. His research garnered international media attention after he presented his findings at an American Association for the Advancement of Science meeting earlier this month.

He added other researchers have developed similar techniques to detect cancer, but his method is the only known system that can identify cancer in saliva.

Wong uses a method known as electric field-induced release and measurement, or EFIRM, that screens saliva samples for the genetic information cancer cells release when they die.

“(EFIRM) has the best performance that we know of,” Wong said. “It outperforms (other techniques) by 30 percent – it’s the holy grail of diagnostics.” 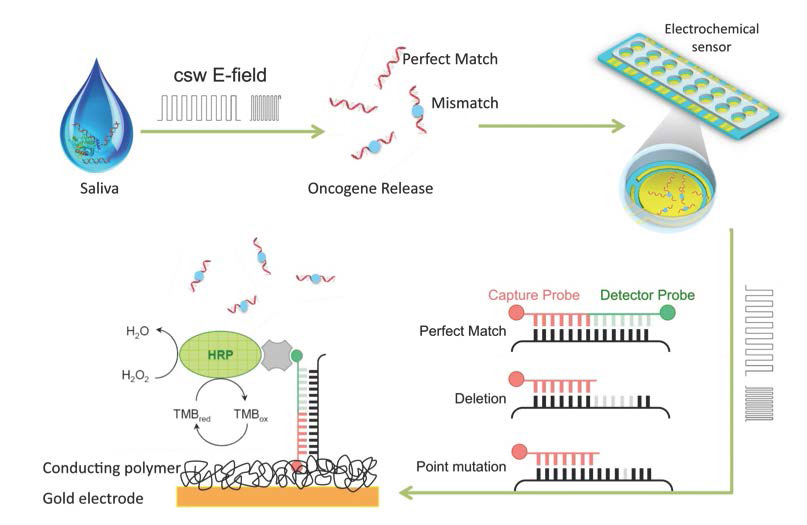 Wong said he thinks biomarker detection in saliva is the key to cancer diagnoses because it is noninvasive, meaning it does not require surgery.

“Traditionally, if you want to know if you have a certain kind of cancer, you have to have a biopsy done or undergo surgery,” Wong said. “(Saliva is) a wonderful way of getting a glimpse into the body noninvasively.”

Vivek Shetty, a professor of oral and maxillofacial surgery in the UCLA School of Dentistry diagnostic and surgical division, uses salivary diagnostics for early detection of PTSD and depression.

“Salivary diagnostics is particularly attractive because (saliva is easier to collect) than blood or urine,” Shetty said. “(Painless sampling) is particularly important for accurately measuring markers of stress-related conditions.”

Shetty’s technology collects saliva in a handheld strip, which can be inserted into a device that detects biomarkers. The portable device can process salivary samples at any location, which Shetty said is important for measuring bodily responses like stress that are heavily affected by environmental situations.

Both Shetty and Wong said they think salivary diagnostics will revolutionize the field of early disease detection because it is easy to use and affordable.

Wong said he thinks future salivary diagnostics will be conducted using GeneChip technology that can map out an entire human genome in a pocket-size, handheld device.

“You can have these devices at home,” Wong said. “(Soon) you’ll be able to find them at Walgreens.”

Shetty said he thinks salivary diagnostics will be the key to personalized medicine.

“There has been a fundamental shift toward personalized medicine, and it’s based on the assumption that everyone is different,” Shetty said.

Shetty added he envisions tying salivary diagnostics into mobile health technology. Patients could input their saliva sample into a reader at home that transmits the information to their smartphone. The smartphone would then transfer the data to a hospital, where doctors can review the data to identify biomarkers related to cancer, diabetes, infectious diseases and other health concerns, Shetty said.

He added saliva sampling can be done more than once a day, which will permit health professionals to trace biomarker quantities over time. Doctors can then predict whether or not the patient will develop PTSD, depression or other conditions before they begin to experience symptoms.

Joseph Loo, a UCLA biochemistry professor, said he assisted in compiling a database of all known salivary proteins.

Loo said he and others urged healthy individuals at dentists’ clinics to donate saliva samples. From the data he compiled, he identified over a thousand proteins present in healthy saliva. When compared to salivary samples of an unhealthy individual, the healthy protein database can rapidly isolate foreign or malign proteins.

Loo, who now studies traumatic brain injuries, or TBIs, said some scientists are interested in investigating the possibility of using salivary diagnostics to identify trauma in the brain. He added that he thinks the field is too new to be able to detect evidence of brain injury, but ongoing studies on the subject may eventually allow saliva to be used to diagnose TBIs.

“Sports injuries are always in the news, so I wouldn’t be surprised if in the future we’d be seeing salivary diagnostics tests for brain injuries and concussions,” he said.

Wong said he is optimistic UCLA will continue to be at the forefront of this new research.

“We are the mecca of salivary diagnostics,” Wong said. “We pioneered this horizon.”