There are concepts in science that need time to overcome initial disbelief before finally arriving at the moment when they are embraced by the research community. One of these concepts is the biological meaning of the small, spheroidal vesicles released from cells, which are described in the literature as microparticles, microvesicles, or exosomes. In the beginning, this research was difficult, as it was hard to distinguish these small vesicles from cell debris or apoptotic bodies. However, they may represent the first language of cell–cell communication, which existed before a more specific intercellular cross-talk between ligands and receptors emerged during evolution.

Interestingly, the result that moved “extracellular microvesicles” (ExMVs) research forward was published first in 2005 in Leukemia, having been previously rejected by other major scientific journals out of simple disbelief. Therefore, the best judge of a new concept is the passage of time, although the speed of its adoption is aided by perseverance and confidence in one’s own data. In this perspective article, University of Louisville researchers provide a brief update on the current status of, hopes for, and likely future of ExMV research as well as therapeutic and diagnostic applications, with a special emphasis on hematopoiesis. 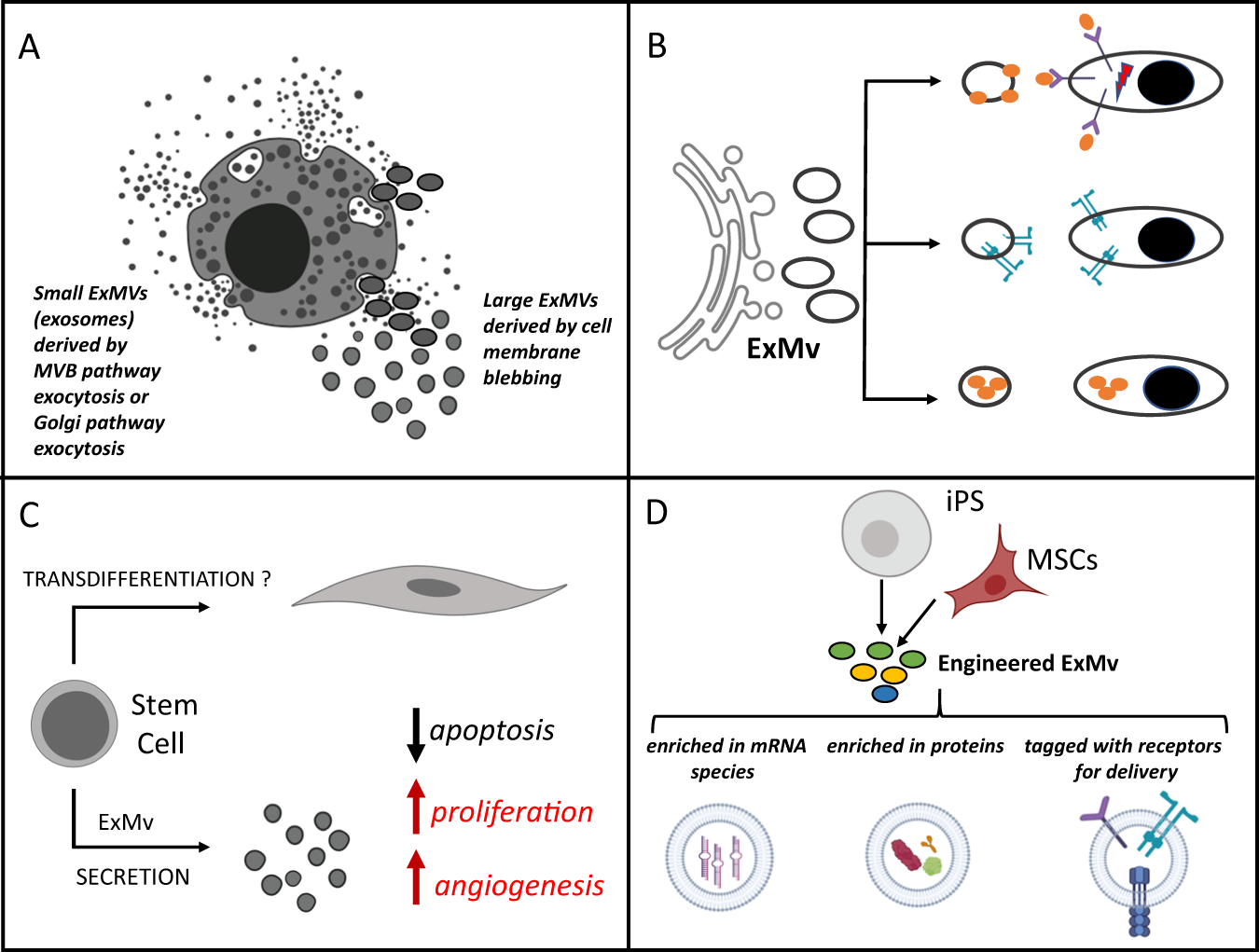 a While larger ExMVs (100–1000 nm in diameter) are derived by cell-surface membrane blebbing, smaller ones, known as exosomes (50–150 nm), are derived by the multivesicular body (MVB) pathway or the Golgi apparatus pathway for exocytosis. b Biological effects of ExMVs. ExMVs may interact with receptors expressed on target cells by surface-expressed ligands (upper panel), transferring receptors to the target cells (middle panel), or transferring cargo containing mRNA, miRNA, proteins, or other biomolecules from one cell to another (lower panel). c The effect of mesenchymal stem cells employed as therapeutics in solid-organ regeneration. There is no convincing evidence that, after injection into damaged solid organs, mesenchymal stem cells, adipose stem cells, or hematopoietic stem cells can replace dying cells by trans-dedifferentiation. By contrast, all these cells may contribute to inhibiting apoptosis, increasing proliferation of surviving cells in a damaged organ, and promoting vascularization by acting as a source of paracrine factors, including those delivered by ExMVs. d Generation of therapeutic ExMVs. ExMVs may be produced from ex vivo-expanded MSCs in cell culture generators or from immortalized iPSCs. ExMV-producing cells could be engineered to produce ExMVs enriched in mRNA species and proteins that would provide pro-survival signals or be tagged with specific receptors for targeted tissue delivery. In the case of iPSC-derived ExMVs, it is important to also consider their potential unwanted tumorigenic potential.