from Rice News by Jade Boyd

HOUSTON — (March 7, 2016) — Cancer cells are well-known as voracious energy consumers, but even veteran cancer-metabolism researcher Deepak Nagrath was surprised by their latest exploit: Experiments in his lab at RiceUniversity show that some cancer cells get 30-60 percent of their fuel from eating their neighbors’ “words.” 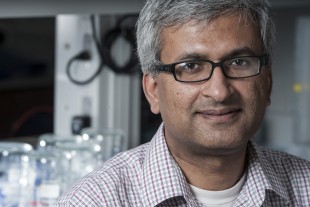 “Our original hypothesis was that cancer cells were modifying their metabolism based on communications they were receiving from cells in the microenvironment near the tumor,” said Nagrath, assistant professor of chemical and biomolecular engineering and of bioengineering at Rice and co-author of a new study describing the research in the open-access journal eLife. “None of us expected to find that they were converting the signals directly into energy.”

The results were part of a four-year study by Nagrath, his students and collaborators at the University of Texas MD Anderson Cancer Center and other institutions about the role of exosomes in cancer metabolism. Exosomes are tiny packets of proteins, microRNA and nucleic acids that cells emit into their environment to both communicate with neighboring cells and influence their behavior. Nagrath, who directs Rice’s Laboratory for Systems Biology of Human Diseases, found that some cancer cells are capable of using these information packets as a source of energy to fuel tumor growth.

His work is the latest in a series of discoveries about cancer metabolism that date to German chemist Otto Warburg’s 1924 discovery that cancer cells produce far more energy from the metabolic process known as glycolysis than do normal cells. The Nobel Prize-winning discovery of the “Warburg effect” led scientists to believe, for decades, that all cancers were dependent on glycolysis. Nagrath’s lab and others have shown in recent years that the truth is far more complex: Each type of cancer has a unique metabolic profile. Nagrath’s work aims at better understanding those profiles and their role in cancer metastasis and drug resistance, and he ultimately hopes to use the knowledge to develop more effective cancer treatments.

In a May 2014 study, Nagrath and colleagues found that highly aggressive ovarian cancer cells were glutamine-dependent and that depriving the cells of external sources of glutamine — as some experimental drugs do — was an effective way to kill late-stage ovarian cancer cells in the lab. And a December 2014 study found that ovarian tumors coax adult stem cells into providing key metabolites they need to grow.

The exosome study began four years ago based upon a growing realization that exosomes might play a role in regulating cancer metabolism.

“A growing body of evidence suggests that exosomes can facilitate crosstalk between cancer cells and other types of cells that are nearby in the microenvironment that surrounds the tumor,” said Hongyun Zhao, the first author of the eLife study. “Some studies suggested that exosomes harbored the potential to regulate cancer cell metabolism, but most research had focused on the exosomes that were produced and emitted by cancer cells themselves. We decided to look at the exosomes of stromal cells, a type of cell that is commonly found in the tumor microenvironment, and see if stromal exosomes were influencing the energy consumption of cancer cells.”

Zhao’s first experiments involved growing cultures of stromal cells, extracting their exosomes and exposing them to cancer cells, which were then monitored for metabolic changes. Nagrath said the tests suggested that the cancer was fueling itself by consuming amino acids directly from the exosomes, and a series of monthslong follow-up tests had to be conducted to rule out other possibilities.

“Our results show that not only do exosomes enhance the phenomenon of the ‘Warburg effect’ in tumors, but exosomes also contain ‘off-the-shelf’ metabolites within their cargo that cancer cells use directly in their metabolic processes,” Zhao said. 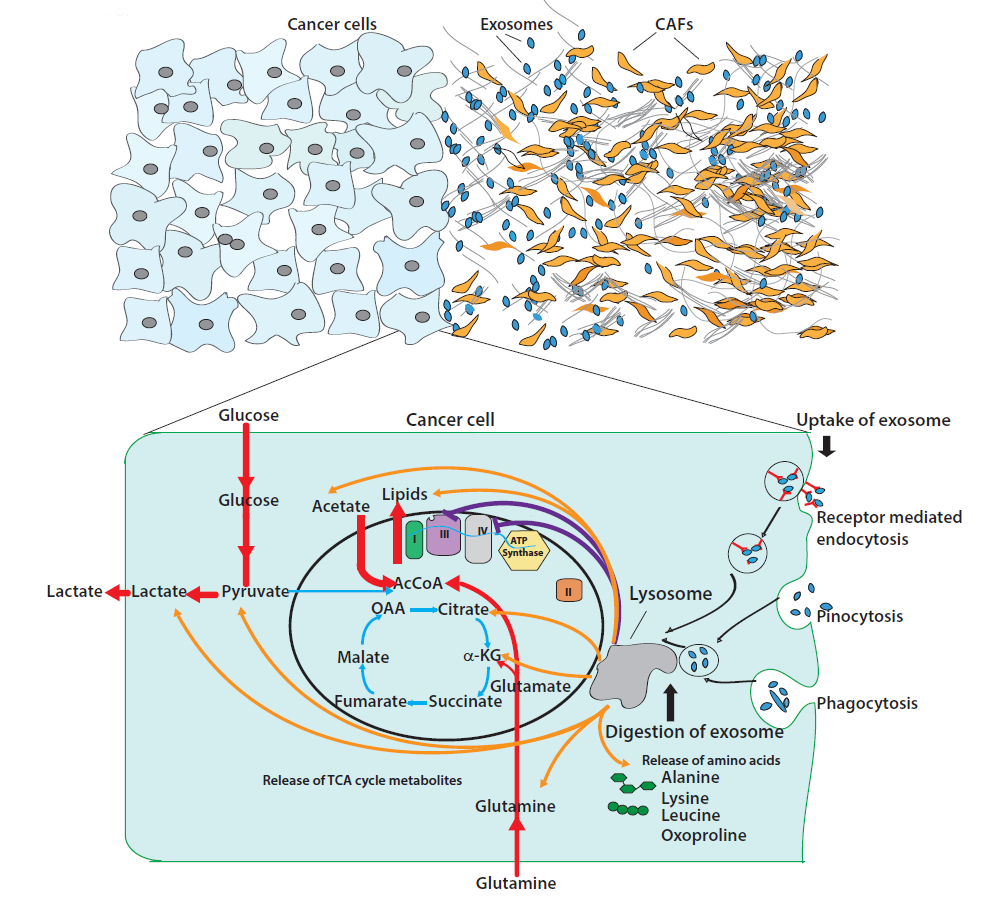 Nagrath said some of Zhao’s follow-up tests also suggest possible new treatment regimes. For example, in some tests, Zhao exposed cancer cell cultures to drugs that were known to block the uptake of exosomal signals. The tests, which showed that the cancer cell’s metabolic activity dropped significantly, helped prove that the tumors were using the exosomes as fuel. The fact that four of the drugs used in the tests — heparin, cytochalasin D, ethyl-isopropyl amiloride and choloroquine — are already approved by the Food and Drug Administration for other uses suggests that they may also be useful as chemotherapeutic agents, Nagrath said.

“Disruption of the exosomal metabolic adaptation of cancer cells could provide a novel therapeutic avenue for exploitation,” he said.

The research was supported by Rice’s Ken Kennedy Institute for Information Technology via the John and Ann Doerr Fund for Computational Biomedicine.