Wildfires are a threat to public health world-wide that are growing in intensity and prevalence. The biological mechanisms that elicit wildfire-associated toxicity remain largely unknown. The potential involvement of cross-tissue communication via extracellular vesicles (EVs) is a new mechanism that has yet to be evaluated. 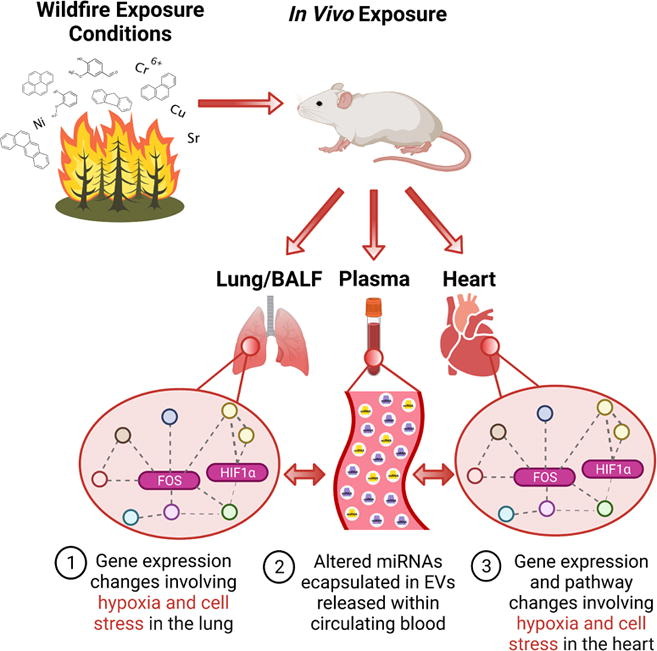 Markers of cardiopulmonary tissue injury and inflammation from BALF samples were significantly altered in response to exposures, with the greatest changes occurring from flaming biomass conditions. Plasma EV miRNAs relevant to cardiovascular disease showed exposure-induced expression alterations, including miR-150, miR-183, miR-223-3p, miR-30b, and miR-378a. Lung and heart mRNAs were identified with differential expression enriched for hypoxia and cell stress-related pathways. Flaming red oak exposure induced the greatest transcriptional response in the heart, a large portion of which were predicted as regulated by plasma EV miRNAs, including miRNAs known to regulate hypoxia-induced cardiovascular injury. Many of these miRNAs had published evidence supporting their transfer across tissues. A follow-up analysis of miR-30b showed that it was increased in expression in the heart of exposed mice in the absence of changes to its precursor molecular, pri-miR-30b, suggesting potential transfer from external sources (e.g., plasma).

This study posits a potential mechanism through which wildfire exposures induce cardiopulmonary responses, highlighting the role of circulating plasma EVs in intercellular and systems-level communication between tissues.