A study led by psychiatry professor Alexander Niculescu, MD, PhD, and published this week in the high-impact SpringerNature journal Molecular Psychiatry, tracked more than 250 veterans in over 600 visits at the Richard L. Roudebush VA Medical Center in Indianapolis to identify molecules in the blood that can help track stress intensity. According to Niculescu’s findings, the blood test can accurately identify people who are at risk of stress disorders or are experiencing them severely.

“PTSD is a disorder that affects a lot of veterans, especially those involved in combat. It’s also an underappreciated and underdiagnosed disorder among the civilian population, whether it be the result of abuse, rape, violence or accidents” said Niculescu, who worked with other Department of Psychiatry and VA researchers on the study, as well as collaborators at The Scripps Research Institute and University of California Irvine. “Countless people are underdiagnosed with stress disorders, which may manifest themselves by drinking more, other addictions, suicide or violence. Our research has broader relevance for not just veterans but the general public.”

The decade-long study looked at the expression of genes in the blood, starting with the entire genome, which has over 20,000 genes. Over the course of multiple visits, researchers tested participants in both low- and high-stress states — their blood analyzed for detectable changes in expression of genes between those two different states that could serve as biological markers (biomarkers) for stress. Researchers were able to narrow the study’s focus down to 285 individual biomarkers (related to 269 genes) that can objectively help diagnose patients with PTSD, as well as determine the severity of their stress and predict future hospitalizations.

They also compared these biomarkers with other well-known markers of stress and aging, such as telomer length. The biomarker signature helped identify new potential medications and natural substances to treat stress disorders that could be paired in a personalized way with individuals.

“There are similar tests like this in other fields, like cancer, where a physician can biopsy the affected part of the body to determine the stage of disease. But when it comes to mental health, biopsying the brain isn’t an option,” Niculescu said “Our research is applying similar concepts from other areas of medicine, but we’re engineering new ways that will allow us to track mental symptoms objectively, including stress, using blood, or so-called ‘liquid biopsies.'”

Much like with his recent breakthrough in developing a blood test to measure pain, and his past work on suicide, Niculescu said this research could be life-changing for individuals who have been exposed to or are about to enter high-stress environments. Such biomarkers will allow doctors to classify people in terms of their current severity or risk for future stress disorders, which can guide career choices as well as treatment options. Additionally, the biomarkers could measure response to treatment in an objective, quantifiable manner.

“Untreated pain and stress can lead to suicide, that’s how we became interested in these disorders, and decided to move upstream and see if we can better understand, treat and prevent them,” Niculescu said. “We think that one of the key uses of our research would be to test people before they have symptoms of an illness to see who’s at risk and possibly treat them early. It’s much better to prevent things for the person, and for the health care system, than to treat somebody who is in an acute crisis.”

With this study, Niculescu said the ultimate goal is prevention — pairing the ability to better predict those predisposed to PTSD with a more targeted approach to medicating those suffering from its affects. It’s preventive medicine done in a precise way, which aligns with the IU Grand Challenge Precision Health Initiative launched in 2016. 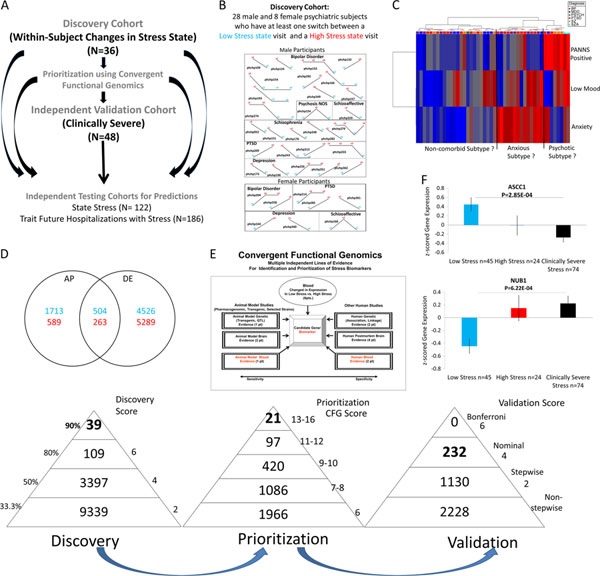 Steps 1–3: Discovery, prioritization and validation. a Cohorts used in study, depicting flow of discovery, prioritization, and validation of biomarkers from each step. b Discovery cohort longitudinal within-subject analysis. Phchp### is study ID for each subject. V# denotes visit number. c Discovery of possible subtypes of stress based on High Stress visits in the discovery cohort. Subjects were clustered using measures of mood and anxiety (from Simplified Affective State Scale (SASS)) [7], as well as psychosis (PANNS Positive). d Differential gene expression in the Discovery cohort—number of genes identified with differential expression (DE) and absent–present (AP) methods with an internal score of ≥2. Red—increased in expression in High Stress, blue—decreased in expression in High Stress. At the discovery step, probesets are identified based on their score for tracking stress with a maximum of internal points of 6 (33% (2 pt), 50% (4 pt) and 80% (6 pt)). e Prioritization with Convergent Functional Genomics (CFG) for prior evidence of involvement in stress. In the prioritization step, probesets are converted to their associated genes using Affymetrix annotation and GeneCards. Genes are prioritized and scored using CFG for stress evidence with a maximum of 12 external points. Genes scoring at least 6 points out of a maximum possible of 18 total internal and external scores points are carried to the validation step. f Validation in an independent cohort of psychiatric patients with clinically severe trait stress and high-state stress. In the validation step, biomarkers are assessed for stepwise change from the discovery groups of subjects with Low Stress, to High Stress, to Clinically Severe Stress, using analysis of variance. N = number of testing visits. Two hundred and thirty-two biomarkers were nominally significant, NUB1 and ASCC1 were the most significant increased and decreased biomarkers, respectively, and 1130 biomarkers were stepwise changed

“We want to prevent the needless tragedy and suffering in people’s lives. By understanding in a biological way a patient’s illnesses and their mental health challenges, we could treat what they have better, preventing future episodes,” Niculescu said. “I have an excellent team and group of collaborators, and we are excited to partner with other groups of experts and people who can carry this forward. There is a lot of good work being done in the field right now.”