The paracrine effects of exosomes in cardiovascular disease and repair

Cardiovascular disease is the leading cause of death worldwide, accounting for almost a third of deaths. Although advances in research and cardiac care have increased survival, there is still a need to develop new strategies for prevention, intervention, and palliation, given the continued high‐mortality rate. Extracellular vesicles (EVs) hold tremendous potential to monitor and treat cardiovascular disease because of their capabilities for analysis and modulation. EVs also compose a critical component of intercellular signaling by transporting molecular cargo from donor cells to recipient cells, thereby modulating gene expression and influencing the phenotype of the recipient cell. Most studies have documented this intercellular communication in vitro, but emerging evidence suggests it also occurs in vivo.

Here, researchers from the Medical College of Wisconsin describe the role of exosomes, a subset of EVs, as mediators of intercellular signaling in the heart. Exosomes are constitutively released from several cardiac cell types including cardiomyocytes, cardiac fibroblasts, endothelial cells, inflammatory cells, and resident stem cells and may be responsible for the communication among these cell types under both physiological and pathological conditions. Exosomes, when injected into the heart, are well known to mimic the cardioprotective and restorative properties of various progenitor or stem cells including cardiac progenitor cells (CPCs) mesenchymal stem cells (MSCs), hematopoietic stem cells and induced pluripotent stem cells (iPSCs). Despite the importance of exosomes in paracrine signaling, less is known about the function of secreted exosomes and their paracrine actions among the different cell types of the heart. 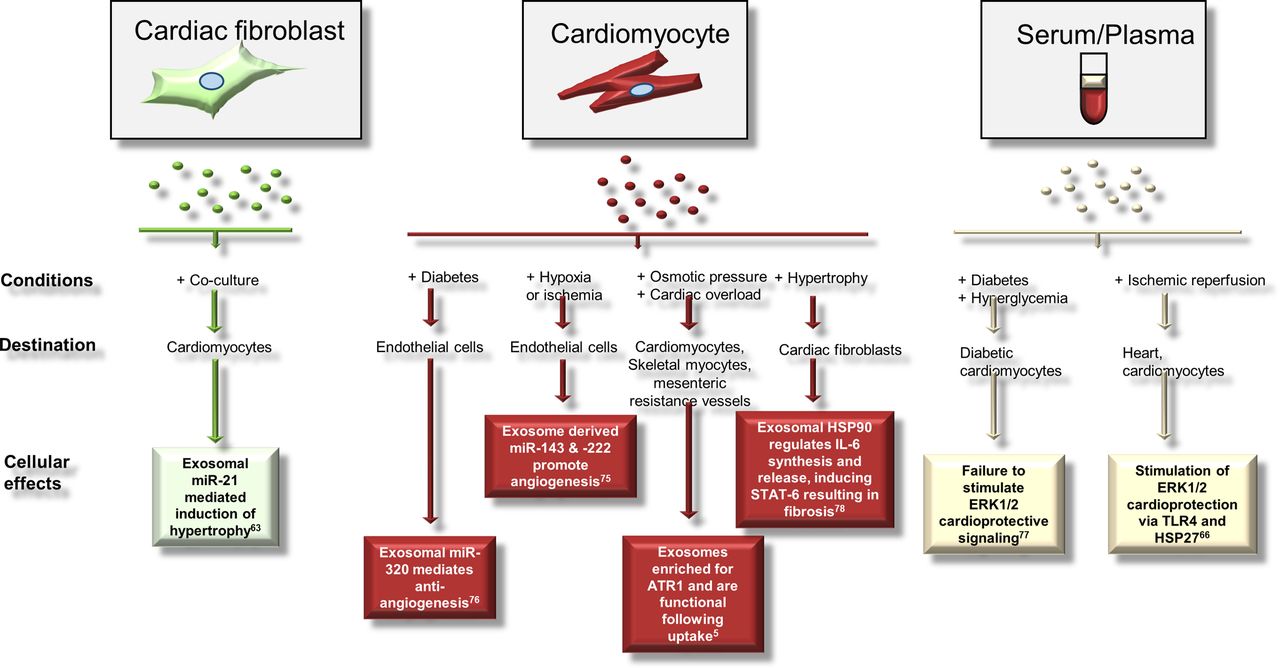 Cardiovascular secreted exosomes exert diverse effects on their destination cells, considering the cell type of origin, exosomal contents, and the conditions of release. Cardiac fibroblast–derived exosomes have been associated with pathology because of their transference of microRNA (miR) 21, which led to the induction of cardiac hypertrophy.The effects of cardiomyocyte‐derived exosomes were either proangiogenic or antiangiogenic, dependent on the conditions of release, which affected their miR cargo. Cardiomyocyte‐secreted exosomes were also found to be involved in the transfer of functional angiotensin II type 1 receptors (AT1Rs) under conditions of stress and involved in HSP90 (heat shock 90‐kDa protein)–dependent regulation of collagen synthesis in fibroblasts in models of hypertrophy. Serum and plasma exosomes arise from a variety of cell sources, and the diversity of their effects results from the disease status and conditions of release. Diabetic serum exosomes fail to stimulate ERK1/2‐protective signaling in cardiomyocytes, whereas plasma exosomes from healthy controls could stimulate ERK1/2 (Extracellular signal‐regulated kinase 1 and 2) via TLR4 (Toll‐like receptor 4) and HSP27.

Tagged with: Medical College of Wisconsin