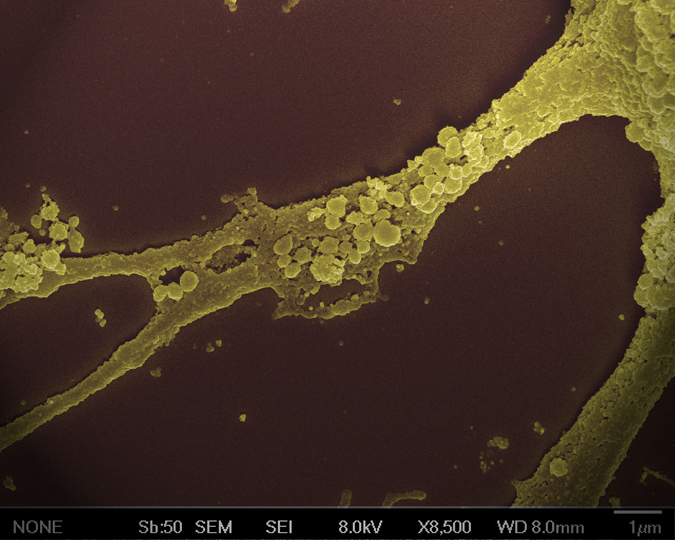 Glioblastoma microvesicles—exosomes—transport RNA and protein to promote tumor growth and can serve as a diagnostic marker.

The first blood-based cancer diagnostic to exploit free-floating exosomes became commercially available in the US on January 21. The launch of this ‘liquid biopsy’ from Exosome Diagnostics of Cambridge, Massachusetts, marks a step towards maturity for the fledgling science of exosome biology. Investment has also begun to flow into the area: on January 7, Exosome Diagnostics raised $60 million in a Series B round, and shortly afterwards, Woburn, Massachusetts–based Codiak Biosciences, a company pursuing both diagnostic and therapeutic applications, closed a $61-million B round, taking to $92 million its total raise since its emergence last November. Fundamental questions about the biology of exosomes remain unanswered, however, and scale up for high-throughput diagnostics remains a work in progress. For use as therapeutics, the industrial-manufacturing challenges will be even greater. “This will be the gating event for turning this into a broadly applicable platform,” says Codiak’s founding CEO Doug Williams.

First described in the 1980s, exosomes are microvesicles found in all living cells. They are formed when vesicles from the endosomal membranes fuse with the cell’s plasma membrane—instead of fusing with a lysosome, for internal digestion. They contain a sample of the cytosolic milieu including an abundance of DNA, RNA, proteins and other analytes; externally they also resemble their cell of origin. “They’re like ‘mini-mes’ of the parent cell,” says Ralph Weissleder, Thrall Professor of Radiology and professor of systems biology at Harvard Medical School in Boston.

Microvesicles harvested from a patient’s blood contain enough RNA to analyze and use as a diagnostic. The ExoDx Lung(ALK) developed by Exosome Diagnostics detects five different mutations—all of them fusions between the genes encoding echinoderm microtubule-associated protein-like 4 (EML4) and anaplastic lymphoma kinase (ALK)—each of which gives rise to a form of non-small cell lung cancer (NSCLC). Because these mutations are sensitive to therapy with an ALK inhibitor, such as Xalkori (crizotinib) and Zykadia (ceritinib), their identification can also guide treatment decisions. A diagnostic based on RNA analysis in exosomes, such as ExoDx, is a less invasive and more readily available alternative to conventional immunofluorescence or immunohistochemistry tests, which require tumor biopsies. An exosome-based diagnostic also allows easier monitoring of the molecular signature of a cancer over time—repeat blood samples are easier to collect than repeat biopsies.