Extracellular vesicles (EVs) are the cell-secreted nano- and micro-sized particles consisted of lipid bilayer containing nucleic acids and proteins for diagnosis and therapeutic applications. The inherent complexity of EVs is a source of heterogeneity in various potential applications of the biological nanovesicles including analysis. To diminish heterogeneity, EV should be isolated and separated according to their sizes and cargos. However, current technologies do not meet the requirements.

Researchers at Hanyang University showed noninvasive and precise separation of EVs based on their sizes without any recognizable damages. They separated atto-liter volumes of biological nanoparticles through operation of the present system showing relatively large volume of sample treatment to milliliters within an hour. They observed distinct size and morphological differences of 30 to 100 nm of exosomes and apoptotic bodies through TEM analysis. Indeed, the researchers confirmed the biological moiety variations through immunoblotting with noninvasively separated EVs opening new windows in study and application of the biological nanoparticles. 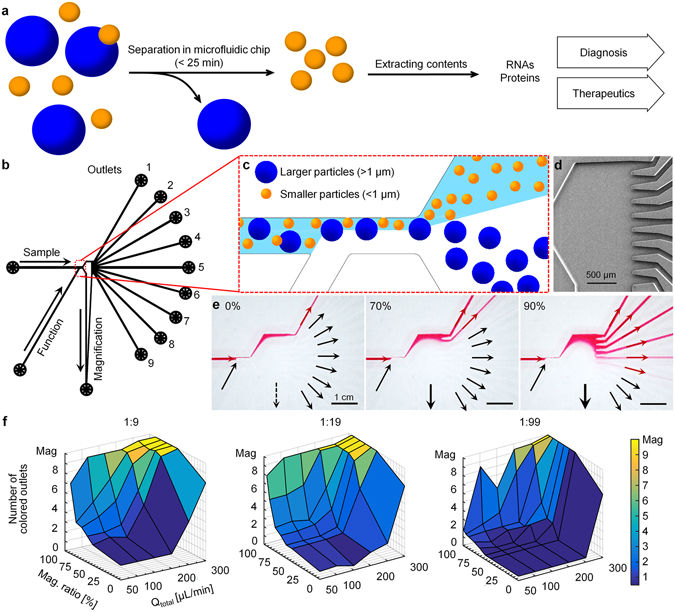 (a) The goal is to separate unpurified biological nano-vesicles and/or micro-particles under mild external force. Since separated vesicles/particles are merely damaged during the process, the present methodologies and systems can be applied not only to diagnosis but also to therapeutics. (b) Microchannel design consisting of two inlets (Sample and Function channels), nine outlets (numbered from #1 to #9), and a magnification channel that withdraw the flow. (c) (Top view) Schematic diagram of size separation of nano-vesicles and micro-particles at the core region of microfluidic device (not to scale). Nano-vesicles and micro-particles are aligned through the upper wall. Then, larger vesicles/particles move toward outlets near the magnification channel while smaller ones travel to upper outlets when channel width is broadened. (d) Scanning electron microscopy (SEM) of the core part of the chip. (e) Pictures of sophisticate control of Sample flow from outlet channel 1 to 9 as a function of withdrawal speed: Under Sample:Function ratio is 1:19, 0, 70, and 90% of total flow is withdrawn to the magnification channel. Red dye represents Sample flow. Increased flow in withdrawing magnification channel results in spreading of Sample flow through outlet channels, #1 to #9. (f) Three-dimensional landscaped graphs depict relations among Q total , magnification ratio (MR), and the number of outlets filled with Sample fluid under the different Sample:Function ratios, 1:9, 1:19, and 1:99. The spread area of Sample flow in the core part of the chip is increased as Q total and MR increase. 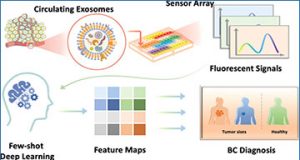 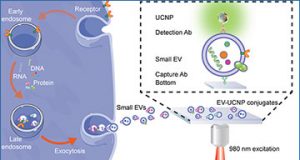 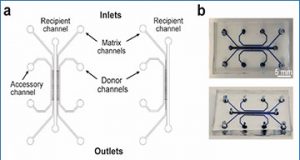 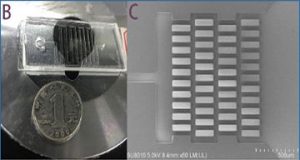 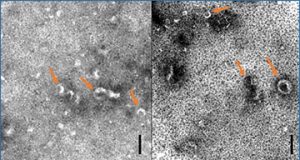