Exosomes (Exo) are small vesicles produced by melanoma cells and the accessory cells of the tumor microenvironment. They emerge via both classical and direct pathways and actively participate in tumor colonisation of distant tissues. The proteins, nucleic acids, cytokines and growth factors engulfed by Exo are transferred to recipient cells, where they drive numerous functions required for the tumor escape from immune system control and tumor progression. By positively or negatively modulating immune cell properties, Exo provoke immune suppression and, in turn, defective dendritic cell (DC) functions. Together, these effects limit the cytotoxicity of T-cells and expand both T-regulatory and myeloid-derived suppressor populations. They also hinder perforin and granzyme production by natural killer cells. Finally, Exo also control the organotropism of melanoma cells. The distinct phenotypic properties of Exo can be exploited both for diagnostic purposes and in the early identification of melanoma patients likely to respond to immunotherapy. The potential therapeutic application of Exo derived from DCs has been demonstrated in vaccination trials, which showed an increase in anti-melanoma activity with respect to circulating tumor cells. However, additional studies are required before Exo can be effectively used in diagnostic and therapeutic applications in melanoma. 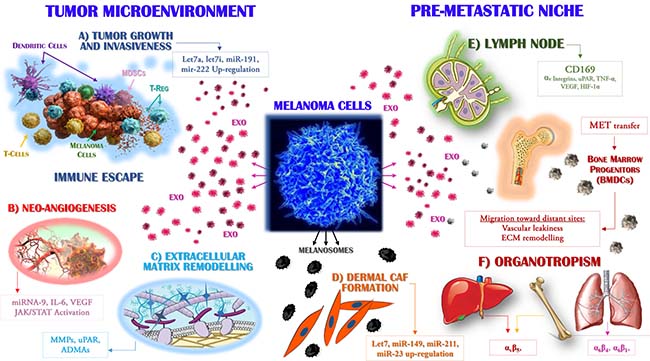 Primary melanoma cells produce Exo that are able to target distinct populations, both within the tumor microenvironment (left) and at distant sites where they participate to the pre-metastatic niche formation (right). The molecular mechanisms by which Exo interact with target cells include the cytokines, miRNAs and receptors variably expressed by or accumulated in these vesicles. Exo enriched in Let7a, Let7i, miR-191 and miR-222 (A) promote tumor growth and invasiveness while are also able to impair immune system activity, leading to the defective maturation of dendritic cells, impaired cytotoxicity of T-cells and the expansion of suppressive populations, including regulatory T-cells (Treg) and myeloid-derived suppressor cells (MDSCs). (B) The expression by Exo of miR-9 and the high levels of both interleukin (IL)-6 and vascular endothelial growth factor (VEGF) drive the neo-angiogenesis, through the activation of the JAK/STAT pathway, whereas uPAR and ADAMs proteases (C) promote the remodelling and degradation of the extracellular matrix. Melanocytes produce melanosomes (D) as vesicles engulfed of melanin that are found accumulated in keratinocytes. Malignant melanoma cells stimulate the collagen-associated fibroblasts (CAFs) of the dermis leading to increased melanoma cell proliferation through the over-production of miR-149, -211, -23, -let7a and -let7b. In addition, the up-regulation of CD169 by Exo is a key step in the recruitment of melanoma cells to lymph nodes (E), whose colonisation by metastatic cells is also favoured by αv integrins, hypoxia-inducible factor (HIF)-1α and tumor necrosis factor (TNF)-α. In addition, specific organotropism (F) is driven by MET-expressing Exo, which in turn promotes the mobilisation of bone marrow progenitors (BMDCs) implicated in neo-vasculogenesis and pre-metastatic niche formation. 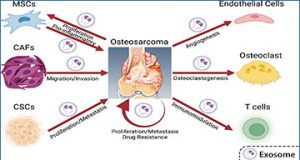 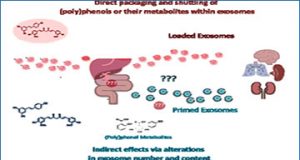