Biologic scaffold materials composed of extracellular matrix (ECM) have been used in a variety of surgical and tissue engineering/regenerative medicine applications and are associated with favorable constructive remodeling properties including angiogenesis, stem cell recruitment, and modulation of macrophage phenotype toward an anti-inflammatory effector cell type. However, the mechanisms by which these events are mediated are largely unknown. Matrix-bound nanovesicles (MBVs) are identified as an integral and functional component of ECM bioscaffolds. Extracellular vesicles (EVs) are potent vehicles of intercellular communication due to their ability to transfer RNA, proteins, enzymes, and lipids, thereby affecting physiologic and pathologic processes. Formerly identified exclusively in biologic fluids, the presence of EVs within the ECM of connective tissue has not been reported. In both laboratory-produced and commercially available biologic scaffolds, MBVs can be separated from the matrix only after enzymatic digestion of the ECM scaffold material, a temporal sequence similar to the functional activity attributed to implanted bioscaffolds during and following their degradation when used in clinical applications. The present study shows that MBVs contain microRNA capable of exerting phenotypical and functional effects on macrophage activation and neuroblastoma cell differentiation. The identification of MBVs embedded within the ECM of biologic scaffolds provides mechanistic insights not only into the inductive properties of ECM bioscaffolds but also into the regulation of tissue homeostasis. 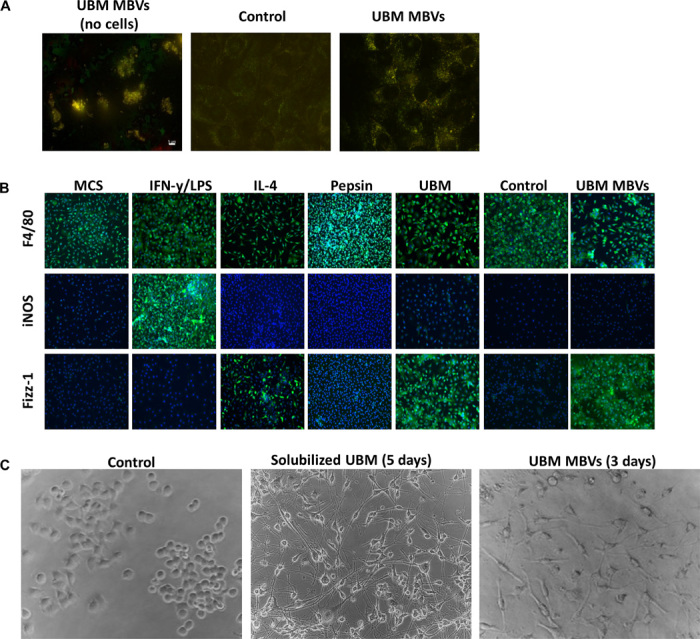 (A) C2C12 cells were exposed to labeled MBVs for 4 hours. The left panel shows a representative image of successful labeling of MBVs before exposure to cell culture. The right panel represents exposure of labeled MBVs in C2C12 compared to the middle panel image (control). Green fluorescence represents DNA, whereas red fluorescence represents RNA MBV cargo that is successfully integrated with target cells. (B) Bone marrow was isolated from C57bl/6 mice and cultured in medium supplemented with macrophage colony-stimulating factor (M-CSF) to derive macrophages. Macrophages were treated with IFN-γ (20 ng/ml) and LPS (100 ng/ml) to derive M1 macrophages, IL-4 (20 ng/ml) to derive M2 macrophages, and isolated MBVs (5 μg/ml) from a UBM source. Macrophages were fixed and immunolabeled for the pan-macrophage marker (F4/80) and markers associated with the M1 (iNOS) and M2 (Fizz-1) phenotype. MBV-treated macrophages are predominantly F4/80 + Fizz-1 + macrophages, indicating an M2-like phenotype. Experiment was conducted with n = 2 samples with four technical replicates. (C) N1E-115 neuroblastoma cells were exposed to pepsin-solubilized UBM and MBVs. Five days (solubilized UBM) and three days (MBVs) after exposure, neurite extensions were visible in treated cells compared to control.

A promising discovery could lead to better treatment for Hepatitis C